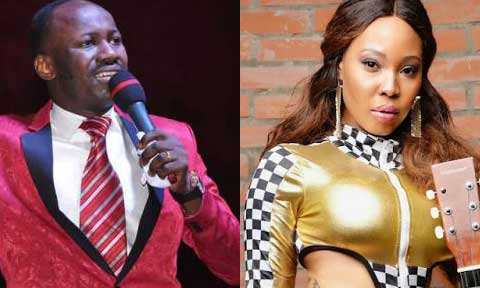 She said this few weeks after dropping a gospel single, adding that it does not matter to her how people will look at her as ‘born again.’

Recall that Stephanie had accused the cleric of entering into amorous relationship with her, impregnating her in the process and abandoning her.

The singer also explained how she started singing gospel song even after being seen as a stripper by some persons.

She said her inspiration to do gospel music came from her experience in Kirikiri prison when she was locked up by Apostle Suleman.

According to her, “What really inspired me was my experience in jail in Nigeria. It was the fear and terror I lived through while in jail in Kirikiri prison.

“I have never done anything that would make me think that I could ever go to jail.

“So, going to jail in Nigeria was terror. I remember what my father came out to say some things about me then when I was in jail.

“Even though he couldn’t do anything to help me, knowing that I have his support meant everything to me.

“The experience in prison made me ask God for mercy and for His help to scale through.

When asked at what point did the issue of stripping in clubs came in, she told Sun, “I don’t know if it’s because I’m an entertainer.

“Generally, as you sing, you are not just singing, you’re dancing and using your body to attract others and entertain your fans.

“I don’t know if that was why people claimed I was a stripper. I was just an entertainer.

No, I wasn’t [a stripper]. My life currently is like a whole new experience. Whatever I had done or practised didn’t please God. I don’t do them anymore.

“I left them all behind in the pool of the drama with the man of God. Old things have passed away and this is a new me.

“I have loved music since I was a child. During children functions at the church, I would take the lead roles. I did choreography and worship.

“Since then, I had loved to sing when I grew older and become a star. I was doing secular music before I came out with my gospel single.

“Last year, while I was in Canada, I tried to make music but it didn’t have the Nigerian taste in terms of the production of the song and the music itself.

“Over there, their songs lack that distinct Nigerian flavour. I care about afro music, which is taking more of African music into the western world.

“I travelled to Nigeria and made a song entitled ‘My Girlfriend’ using my stage name Kimora.

“I came to Nigeria to make a gospel song because I have always loved gospel songs. Having been in church since I was a child, I had wanted to flow with that passion.

“I met with some people I was supposed to work with and they explained to me that if I go into gospel songs, I would be wasting my time.

“They told me that my song might be everywhere but I won’t make money. They said the best it would get me was popularity but nothing else.

“They said nobody would invite me for shows because I don’t attend any of the big churches in Nigeria nor belong to any famous choir.

“I was told that I won’t make money because people don’t know me.

“They explained to me that later on, I can go back to gospel songs because I am still very young. In life, you don’t have to rely on your own wisdom alone, you have to listen to the people who are in the business.

“It made sense to me that secular music was okay for now and later I can change to gospel, but originally, gospel was my thing.

“Immediately, I changed to secular music. I got into the secular lifestyle. I started music last year officially.”