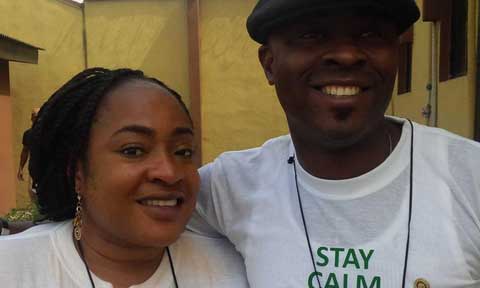 This warning came after someone had seen her husband, Kayode Salako at an outing with his female friend, and sent a text message to the actress.

Salako however explained through a statement obtained by Saturday Tribune during the week, stating that his marriage is not a bondage but an understanding union between two mature individuals.

While reacting to this, Foluke Daramola exclusively told Saturday Tribune via a phone conversation. “This was not about someone sending a text to me about seeing my husband with another lady, it is about people insinuating that whatever he does on social media means that I am having problems with my marriage.

He was just reacting to the fact that our marriage is intact. I want people to mind their business concerning my marriage. It’s overflogged already, everything about me is my marriage, my marriage, marriage!

The pressure that Nigerians put on all celebrities and our marriages is not making the relationship healthy, when everything about you is let out to the media, there will be a problem, there will be pressure from all angles, even if they see my husband with a woman, does it mean he has anything to do with that woman? And even if anything should go wrong at the end of the day, if someone tells me about it, what does the person want me to do? Does the person want me to say I’m not interested anymore?” the actress asked

She however continued, “my husband is a public commentator, he talks about politics, social issues, education, and even featured in my last film, the cobweb, nobody even talks about all these aspects of him, it’s just my marriage, it should have been over flogged by now. I don’t talk so much about my marriage, except when I post lovely photos because I’m grateful to God for my family, only for people to start saying when are these people going to break up or get separated.

I have found that a lot of Nigerians are sadists and just want to bring people to that place of sadness that they are, unfortunately, no one will bring me to that place of sadness because my marriage is intact, I’m happy with my life, it doesn’t mean we don’t have our challenges because we are human beings, but if I have any challenges with my husband, it will never be on the pages of newspapers or social media.

No matter what happens, it cannot degenerate to me leaving my husband because he is not a wife beater or an abuser, but as for infidelity, I can handle it very well” Daramola Salako affirmed.