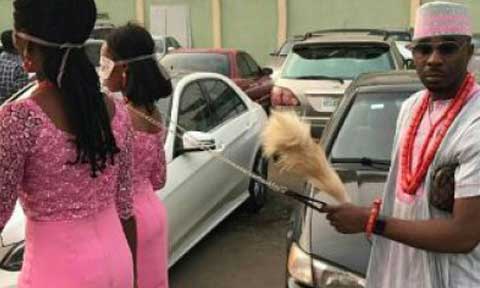 But the man whose real names are Mike Eze-Nwalie Nwogu, will not go down in history as his bizarre attempt at hugging the limelight has ended in fiasco. Very bitterly, he must have realised that while the Westernisation of Africa is growing in leaps and bounds, certain actions are still repulsive to African cultural morality. It is not a question of whether what he did with those girls was right or wrong (there’s no clear cut law against such action), rather, it’s a question of society not accepting its normalcy. Period.

While some people like Kemi Olunloyo and Wale Gates have come out to castigate the Lagos state government for its decision to leave other pressing matters of state to focus on Pretty Mike, they will soon realise that it is a populist decision. Just the way the National assembly said a vehement ‘NO’ to imposotion of gay marriage on Nigeria, irrespective of international conventions on the rights of people to determine their sexual orientation, these supporters of Pretty Mike’s rights and the ladies freewill must not forget that this is still NIGERIA.

Lessons For Celebrities and All

1. Controversy sells, but the type that assaults society’s sense of morality will lead to oblivion

2. Know When To Leave Stage: Just because he did it once and got away with it didn’t mean he could always get away all the time. Check out who is apologising and campaigning for women rights and advocacy now!

3. It’s not the hype that matters, it’s what you do with it. Unlike Bobrisky who husltes with his Barbie status, Pretty Mike seems not to have any endgame with his anti-society lifestyle

4. There’s a limit to offense. The pariah status that comes with being decidedly socially defiant doesn’t move brands.

5. Understand the environment before you enact your act: Maybe Pretty Mike was encouraged by Bobrisky’s popularity, but he failed to realise that while the male barbie assaults the general moral sensibilities of many, many more are entertained by him. Plus, he has not really admitted to being gay officially, making his game an act rather than going directly against the law or norm.

The question is has he learnt his lessons? Even if he hasn’t, everyone can learn from this.