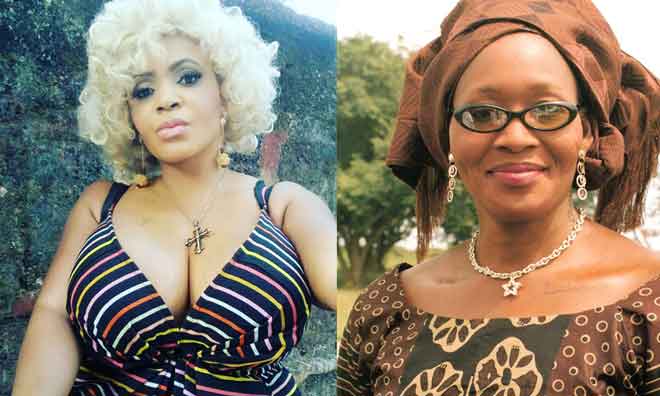 Kemi Olunloyo, daughter of a former Governor of Oyo was two weeks ago arrested and detained in Port Harcourt for allegedly making defamatory report against the founder and General Overseer of Salvation Ministry, Pastor David Ibiyeomie.

She was on Thursday granted bail by a Port Harcourt Magistrate Court but was immediately remanded again by a Federal High sitting in the same city.
Just yesterday, another Nollywood actor, Uche Nnanna noted that Jesus Christ, would not have arrested Kemi over her comment.

Reacting to the arrest and detention of the controversial journalist, Cossy said she expected politicians, who had received much of Kemi’s negative publications to arrest her and not a pastor.

Cossy wrote on her Instagram page, “I expected Mrs Kemi to be locked up by her father, Obasanjo, Mr Kosoko or other Actors but not a pastor.

“That really beats my imagination. Well…. Maybe I should have reported each and every pastor that defamed me during the dog saga.
“Yes they preached. During the ordeal after the whole frame up. I was hurting. I was alone. I was a poor Little girl trying to find her way.. Trying to understand life. I was called all sorts of names.

“Pastors preached. The congregation moaned and rained curses to the name that brought shame to womanhood.

“My mum was in church somewhere in Abuja. The pastor preached about this fake sermon. The lust after money.

“The girl that slept with dog just for N10,000 dollars, Who is she then to challenge the pastor?
“Well she was just the mother to the girl that supposedly slept with dog. She simply left the church and never went back. My father wasn’t spared either.

“They gathered in the church and went to my village house to rain curses on the girl who brought immense shame to the church and the village. My father knew it was just a movie. So never really cared. I was withdrawn.

“I was hurting. How can an award winning performance I was paid only #30,000 naira brought me so much head ache and pains. How can the pastors believe such lies. Didn’t they call on God for guidance before preaching and prosecuting me back then.

“The magazine made lots of money off the image they created of me. The jobs stopped coming. From a young starlet I went down to zero. All hope was lost. I thank God I didn’t take a leap of fate into the now popular eko bridge.

“The people I looked up to described me in unimaginable ways. That’s when I really decided that most pastors have lost touch with God. I forgave them all. The magazine. The pastors.