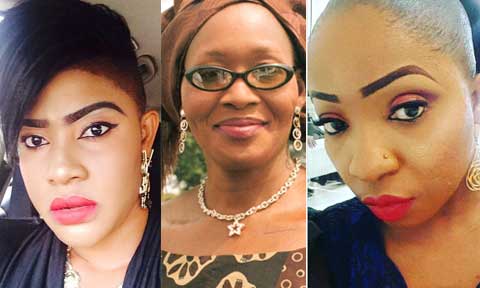 More or less like Anita and Angela just gave Kemi Olunloyo her meal, and she will dwell on it till eternity.

First it was Angela Okorie who was attacked by Kemi Olunloyo, when the self-acclaimed mother of all, took to her page to accuse the actress for having a romantic relationship with former president of Gambia, Yahya Jammeh.

Afterwards, it was Anita Joseph who triggered the wrath of Kemi Olunloyo when she posted a write-up encouraging ladies to have more than one lover at the same time.

Kemi took to her page to address the issue as the lashes out at the actress for dishing out such irresponsible statement, thereby calling her ‘Nollywood Prostitute’.

Looks like its just getting hotter as Angela Okorie has taken her time to clap back over all the blogger said about her some days ago.

She said: “you wanted my attention, now you have it, I see your madness has gone to a different level, listen old witch, my bible tells me not to suffer a witch to live. I noticed you are fond of attacking celebrities, “my case is different” I’m here to warn you, if you don’t stop saying ill things about me, you will die untimely, since you love cursing, may it never depart from you, you call women prostitutes, you shall die in prostitution, you will get drunk in your own blood and eat your own flesh bastard. Listen I am too graced to be disgraced, not a mere ant like you can stop me, you are too small and my God will punish you. Your generation to generation will suffer madness, you can’t bring me down for any reason, and my foundation is strong for he that is in me is greater than he that is in the world. If you try to stop me, I will crush you, I am ready for you old witch.”

However, after Angela Okorie’s Clap Back, joyous Anita Joseph took to the actress’s Page to give her moral support saying “About time baby”.

We await the continuation of the drama because Madam Koo, Kemi Olunloyo never forgives nor let thing pass.