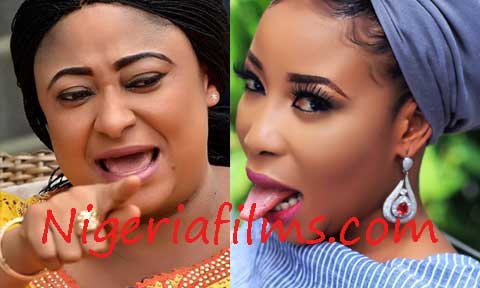 Here's what went down! Few weeks ago, Ronke took to social media to caution her colleagues for the display of their worldly possessions on social media.

Now things eventually cooled off on social media after the outburst, but it has now kickstarted after they attended the same party over the weekend.

According to Liz's rant, Ronke while handling the mic made mention of the fact she was called a beggar, and this made her uncomfortable as she felt harrassed.

lizzyanjorin Congrats about yestarday dear. Mofi ya lana ni o dear..And i pray you will not use the money for sickness or unmeaningful thing insha Allah...you will be bless with all beautiful things of life .AMIN.. . PRT2 ...Because you have access to microphone does not mean you should loose your sense of professionalism.

Imagine if am a fearful person? I would have left the event with fear and the little I brought would have being a minus. We rise by lifting others. What happen to your brain and conscience? What if i climbed that stage and I replied you nko? The parry will scatter? We were taught to play along with our worst enemy on stage as a best friend then pick your fight back once you come down from the stage as a well trained artist.

Next time you don't act mature with me in an event, I will use that cord of the mic to remove the little hair that remain on your empty head. Elenu bi Napkin onito. Atleast, people can watch you on live video and guest at the event can testify to how being unprofessional you are. Coward.

Later she will say...DID I MENTION YOUR NAME? And when next we are meeting, try and bring your original birth certificate because people that are judging through stature are the ones deceiving you. I get your size and I promise to give it to you woman to woman when next we meet.

Thank God, Egbon Pasuma was already on stage before I came in the second time....ori e yo e. But you won't escape me next time. Its a promise. Except you act professional and mind your business towards me. You are about to eat your shame raw. One simple truth about me...when it comes to friendship I have no class or age. I love people that loves me genuinely and when it comes to evil act...I will not take it cool with you. Infact I need to write about my journey in this industry soon. I go kuku mention names sha..