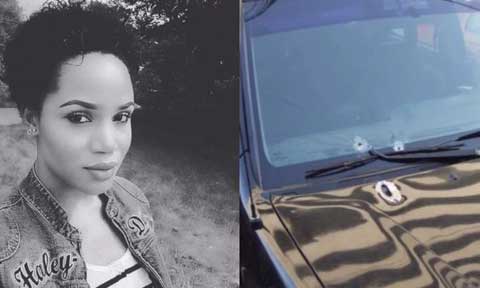 The nudist who turns 35 today advises people to be good to one another It was definitely a day of joy and gratitude for popular nudist and former gospel singer, Maheeda, as turns 35 years old on Wednesday, November 22, 2017 The former gospel singer took to her Instagram handle to share the experience she had with armed robbers 10 years ago.

The mother of one best known as Maheeda is also known for her controversial photos and statements. She attributed her survival to the prayers of a little girl she helped three days before the unfortunate event took place. Maheeda whose real name is Caroline Sam who shared photos of the sad incident inspired a lot of fans and urged people to be good to one another and give help where needed.

“About 10years ago when I was still living in Nigeria, I went to visit a friend of mine. Reaching his House I saw a sick girl out side on the floor helpless. I asked what’s wrong they said she is sick but no money to take her to the hospital. I went inside the room but couldn’t stay knowing that child reminds me of me being kept outside for my body to heal itself because we had no money for hospital.

So I came out gave them money and ask them to take the child to the hospital immediately!!! .They called me that evening that the child has been admitted in the hospital as soon as they reached. They thanked me and off the phone….. 3days later while I was coming back from the club, I was attacked by gun men who shot at my car and a bullet hit me. 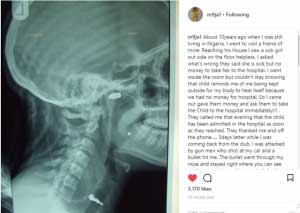 I was bleeding like hell… I was coughing out glasses and blood which made me ask the nurses if I will make it? I’m a strong woman but for the first time in my life I asked someone if I will survive!!!!! But I did anyway the next day the little girl I helped called me from her own hospital bed to tell me she prayed for me that her brother told them immediately I was shot to pray for me and she did.. that I shouldn’t worry nothing will happen to me!!! We both recovered and here I am today telling the story… so now if I say thank God for life, you will feel me better ..

I am 35 years today thank God for life⚡️ and don’t forget to be good to people, you might just be saving your own life/future!!!!” A beautiful inspiring story indeed! There is no denying that despite her controversial persona, Maheeda definitely has a kind heart. There is beauty in reaching out more and lets all take a cue from her experience and help people in need.