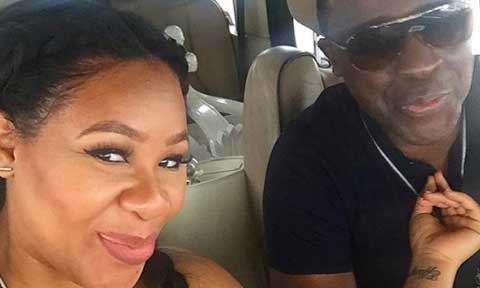 Insiders revealed he is having increasing spat with new wife, Sandra. Sources claimed but unlike former wife's associations with friends and associates that wrecked their matrimony, the cause of Frank & Sandra Edoho increasing disaffection in the new marriage is tagged 'growing cost of lifestyle'. Frank is said to be uncomfortable with ballooning expenses of flamboyant lifestyle Sandra initiates.

Insiders revealed Sandra relishes in unique leisure experiences that comes at high cost. Said to have acquired taste for the refined things of life only grounded wealth can provide with her rapport with the hi end london social circle, informants claim sandra makes the seeming good life ex wife Kathrine had with Frank that of hand to mouth.

She is said to prefers constant vacations abroad, peculiar jewelleries, attires and related lifestyle materials. And the urge to constantly fix and refix there Victoria Garden City home. Outside of these, the london returnee is said to have a chunk of hangers on- particularly family that relies on her.

And there is the case of the need to give the girl she had before hooking up with the broadcaster desire 'life and education' Also included are drives by Sandra for Frank to up his game and social grace with new attires and a brand new car ( He has changed his automobile from a Range Rover Sport to Vogue, of the same colour - Red) All these (plus that of sustaining the upkeep of children with ex wife, Katherine) are said to be eating deep into Edoho's earnings- and he is said to be increasing disagreeing with the increasing cost.

READ ALSO: Another Nollywood Actress Has Passed Away

According to an insider 'at first Frank enjoyed the new approach to life, but with depleting riches, he has had a rethink and attempting to resist them' Sources confirmed the moves to curtail his wife's excesses and the new family's expenditures is the cause of growing disaffection between husband and wife.

Though informants claimed they are trying to keep the spats as quiet as possible- the effect is becoming apparrent to close friends. 'The smitten looks and public caress are becoming far and in between' a source divulged. Disclosed another ' the prayer is that the situation is arrested and things do not get out of control'

Pastor says, "Give and you shall receive", he did not mean u should give ur body & receive money-- Tonto Dikeh

QUOTE OF THE DAY: I am a cute girl and still feel cute inside, I still think of getting married - Singer Kenny St. Brown

Photo of the Day: Wow! Flashback... Transportation Back Then