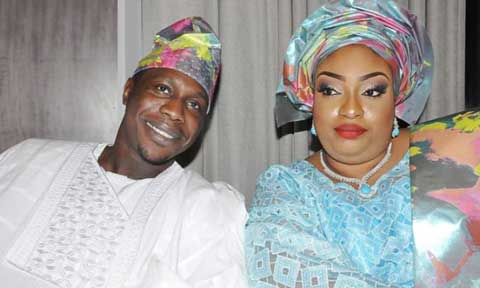 Read also: Everybody is after Baba Ijebu’s money – Obasanjo’s ex-wife explodes over son’s controversial wedding to Adebutu’s daughter
His mother accused his wife, Tope (nee Adebutu), and ex-President Obasanjo of causing his disappearance.

Olujuwon and Tope, daughter of Sir Kessington Adebutu, promoter of Premier Lotto known as “Baba Ijebu” wedded in May last year. Their marriage had a rocky start as it was fraught with problems even before it was solemnised.

Mrs. Obasanjo filed a suit against his estranged husband and Sir Adebutu asking the court to order the postponement of the wedding until after her son’s 34th birthday which was then days away.

Her prayer was not granted. Then the woman said she received a prophecy warning Olujuwon of dire consequence if he married before his birthday.

According to Mrs. Obasanjo, five month into the marriage, it was already on the rock allegedly due to spousal abuse on Tope’s part.

She gave an account of her son’s marital strife in an interview with The Sun, “There are occasions when she slapped him. Can you imagine a woman slapping her husband? She disgraces him, pulls his shirt and threatens him. She tells him that she would ruin him and all manner of humiliation. She said she didn’t know that she married a 419, that it was only the name that the Obasanjo’s family have, that they don’t have money. She is just a carbon copy of her mother. Her mother joins in cursing and threatening him which his wife also does to him at home. He has been seriously battered and that is why he is running away from his wife.

“How can a man be running away from his wife and they are insisting he stays with this jewel of destruction? And daddy OBJ does not deem it fit… All he cares about is that he should stay married to her.”

Continued: “He is the one that should be held responsible for whatever problem now because I heard that this young man has been reporting this matter to his father. This girl has been threatening his life, and many times he will run away from her. This even happened two weeks before the wedding. When daddy OBJ called, I told him, go and look for my son because this game you are playing I don’t understand. How can a former head of state say that he doesn’t know where my son is? I said please nothing must happen to my son and I am going to cry out to the whole world to hear about it. I didn’t understand why he was phoning me and my son’s wife too called me. Right now they don’t know where my son is and that was why I went to the police.”