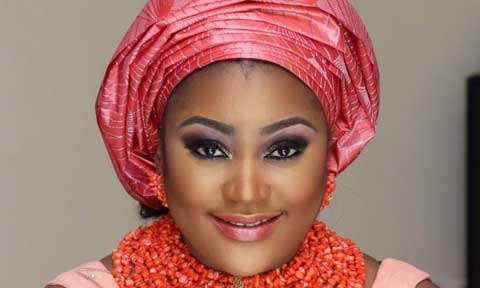 Despite the fact that the industry has been taken over by new talents, Uche is still very much relevant and currently working on her new movie project. In a recent chat, Uche disclosed what she has been up to, while tackling some other issues.

You recently took your birthday to the slums? What inspired that?

Yes, the desire to put smiles on people that desperately need help or are ignored. The bible says love your neighbour as yourself and God is indebted to anyone who lends a helping hand to the poor. I might not have much but the pain in my heart, seeing homeless and hungry children with their helpless parents, pushed me to reach out because they were badly affected by the flood and really needed food to survive.

Yes, with my last baby’s foundation name. On her birthday eve, I had a dream and in that dream I was looking everywhere for her and then on the TV in that dream, I saw her with helpless children, playing, skipping, giving them food and cake and then in the dream, I ran to the kitchen to find out that all the food we made for her birthday party was gone. I started looking for her and when I saw her she said, “Mummy, I am having the best party of my life”.

When I woke up, I couldn’t do anything because I was not financially capable then so I decided to register a foundation for her and to the best of my financial ability reach out to the needy in every way I can in her name, so she can grow up with it since that is God’s message for her.

You’re not as visible in movies these days. What’s happening?

I’m working on a movie now in Niger State. I do movies but maybe not as regular as I used to.

How do you manage motherhood and acting?

Well, those are two major responsibilities for me and are very important individually, one means life to me and is the very essence of my existence, while the other puts food on my table, so I carefully attend to both critically to avoid lacking in any area of my responsibility and career.

What are your beauty secrets/ routine?

Well, I eat right and stay completely off junk food. I eat very well and most importantly, I don’t do late night foods, I don’t eat after 6 p.m and I take my ‘stay fit’ herbal tea, twice daily, that keeps me feeling healthy and clean on the inside. I also snack on fruits and garden eggs.

Celebrity marriages are crashing everyday, do you have fear for yours?

Crises in marriage really has nothing to do with the celebrity status. Marriage is an agreement between two matured individuals and when these same matured individuals feel that they do not have any need to be together, for safety of their lives or for peace of mind, it is their choice to remain or scatter. No one knows the battle we fight in our marriages, the pain and hurt we feel, the way we have to bottle it all up because we are in the lime light and because we do not want to be castigated.

People forget that celebrities are human too and have feelings, desire and deserve to be happy too so when I hear things like celebrity marriages crashing, I wonder why so much attention is paid to it, really everyone has his or her cross to bear.

I once interviewed a married actress who said almost all married Nollywood actresses are unfaithful, how true is that?

That’s the biggest lie from the pits of hell. Everyone should speak for herself. That we are in the lime light and have admirers from the opposite s3x doesn’t mean we are sleeping with them. Just like there are married women out there that are enjoying extra marital affairs, so is it obtainable in Nollywood and it is totally a personal decision, there are still many married women that are very faithful in their marriages and have been unjustly accused because of this generalised insinuation.

Would you leave your marriage if your husband cheats?

I am sure if your own husband cheats you will know what to do. It’s a personal decision and I don’t need to sing it.

How do you handle fame and male fans?

I’m naturally a very down to earth person and fame hasn’t changed me a bit though it has restricted me from a lot of things I would love to do. As for male fans I appreciate them for loving what I do but it remains that way.

What has celebrity status deprived you of?

Hopping on a bike when I am stuck in traffic is one of those things I love to do on Lagos roads or walk into Oyingbo market to do my shopping locally to get fresh food stuffs instead of sending people and they don’t get the real stuff. Also being as free as air without making headlines or having people stare at you like they are watching a movie.

What has been your best moments as an actress?

It would be during my traditional wedding when the whole village came out to see their goddess. Even the king of my village graced the occasion in full regalia, and the respect and recognition given to me by my state to repair the roads just so my guesthave good access to my home. Also, the spark of pride in my father’s eyes for recording the most successful and crowded event till date in my place. It was indeed a great honour.

Quitting what? Never! that’s my profession, my career, my life.

Would you mind if any of your daughters join the field?

My first daughter is already an actress and has played major roles in three movies recently.

What kind of role would you reject?

Nudity, in any form.

Has marriage limited your flexibility in choosing movie roles?

No. My job entailes bringing a character to life and I go all out to give it my best interpretation.

What’s on take on domestic violence?

The term domestic violence often brings to mind the concept of the ‘battered wife’ or perhaps a married couple’s verbal argument escalating into physical assault. Domestic violence can also be child abuse. Even if the children are not physically injured, watching or hearing a parent being abused can have severe psychological implications on the child and it is totally wrong.

Domestic violence is a total violation of the plan that God had when he joined man and woman together and totally against Gods plan for families. First Corinthians 7:4 says, “The wife does not have authority over her own body but yields it to her husband. In the same way, the husband does not have authority over his own body but yields it to his wife.” The two belong to one another and are called to love one another as Christ loved us. Marriage is an image of Christ and the Church. Domestic violence is a far cry from the character of Jesus Christ so it is an abomination to indulge and be a perpetrator of the act.

To curb domestic violence, women have a great role to play by understanding the kind of men they get married to or get entangled with and understand their temperament thereby limiting the use of verbal abuse that will give rise to physical battering and also women should know when a man is irresponsible, easily intoxicated and gets physical at every provocation and then walk out of such a demonic relationship or marriage with both eyes intact.

Men also have a great role to play by understanding the fact that women’s strengths lie in their tongue and they don’t mean almost everything they say so that shouldn’t deserve beating, also they should practice their boxing skills with men like them not with the weaker s3x that God has given to them to nurture and take care of. Also they should device other means of exhibiting anger.

Both parties in a marriage have roles to play in stopping domestic violence.