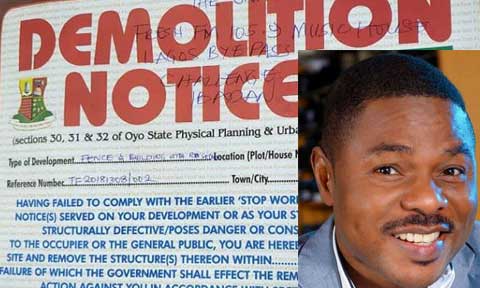 The notice issued by a Task Force from the Governor’s Office dated Monday, August 13, 2018, and was signed by an anonymous chairman was served on the management of the Music House with a three-day demolition notice.

However, in a statement Wednesday by the Chairman of the radio station, Ayefele titled: “Governor Ajimobi and The Music House”, he said the station received the news of the demolition Notice with mixed feelings. 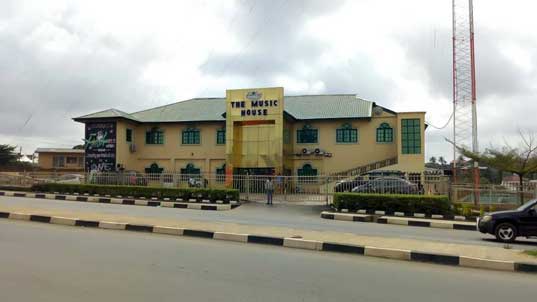 According to the renowned entertainer, in the last six weeks, his organization has received series of letters from various state agencies and officials including Bureau of Physical Planning & Development Control, Attorney General and Commissioner for Justice, and Personal lawyer of the state governor.

“What are these letters for? Have we contravened the Oyo State building plan code? What have we really done to deserve a demolition Notice?” he quipped.

“On October 2012, the government of Oyo State under Governor Abiola Ajimobi had threatened to demolish the expansive music House Complex owned by the Music merchant, Dr. Yinka Ayefele, MON to allow for the expansion of the road into a dual carriageway but the idea was later shelved.

Speaking as a guest on a radio programme inside the same Music House Complex located at Challenge area of the ancient city four years after, Ajimobi said he was happy that he didn’t listen to those who wanted the property demolished.

Fast forward to 2018, a Demolition Notice dated Monday, 13th August 2018 was served on the management of the Music House with a three-day demolition notice.

The management of music House, on Monday, received the news of the demolition Notice with mixed feelings. Although, we are not really shocked because series of letters coming from State government to both management of the building and Fresh FM, the tenant of the building have already pointed to an obvious fact that the state government is really up to something evil.

In the last six weeks, we have received series of letters from Bureau of Physical Planning & Development Control, Attorney General and Commissioner for Justice, Personal lawyer of the state governor and several other government agencies.

What are these letters for? Have we contravened the Oyo State building plan code? What have we really done to deserve a demolition Notice?

Earlier, we have received a letter requesting to inspect the building which we obliged the state agency even when we knew the motive was wrong and not in good fate. The agency came up with 10 fictitious reports stating among others that the Radio Tower (Mast) erected within the compound was not covered with the approved building plan whereas, we got the NCC and NBC approval before erecting the mast, one wonders when it becomes the job of Physical Planning to approve the erection of Radio Mast.

The agency also raised the issue of spiral staircase which was introduced for easy access to the basement, the wall fence, structures such as general store, Power House, Canteen among others as not duly in the approved plan and recommended that “since the developer has deviated from the approved building plan it automatically means that the building is not covered with any approval any longer”, the report stated.

Why is the Music House Complex singled out for this exercise among other buildings on the same axis?

We view this as a selective justice by the state government especially when the Governor had earlier said during his visit to the Music House that some politicians actually advised him to demolish the building on the allegation that Ayefele is not supporting them. Is the govt planning to expand the road again? Of what political gain will the demolition add to the achievement of the state government? When is the state agency going to demolish Cocoa House for housing some radio stations?

The Music House Complex was duly approved as Business and Commercial Building and all approval was legally done according to the laws of the land.

This is a business complex that accommodated almost 150 workers from where they draw their daily income and feed their families.

If the state government feels the only way to pay a hardworking man on the wheelchair is to demolish his property which has not in any way affect, obstruct or cause da disturbance in the state, then we leave everything to God but then, this may be the last straw that will break the Camel’s back.

However, our correspondent spoke to one of Governor Ajimobi’s media aide, Babajide Fadoju for the state government’s reaction. He, however, referred us to the State Commissioner for Information, Culture, and Tourism, Mr. Toye Arulogun for a comprehensive response from the government but we couldn’t reach him before going to the press.