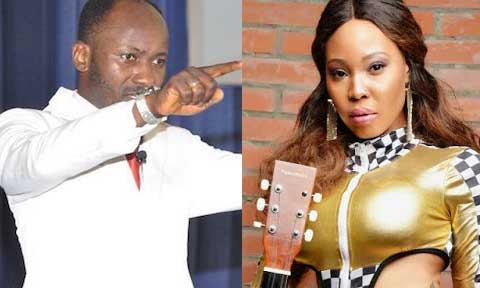 Meanwhile, the edo state pastor has being considered like a small god whom many look up to as a man of values who can never go wrong.

Although the ministry (OFM) has refuted the allegation claiming it was all false as the lady in question, Stephanie is allegedly detained without access to family or lawyer.

While there have been many sides to the story, one is left dumbfounded with the confusion trailing the case.

With different stories from the lawyer, kiyamo, the Apostle, and the singer, Stephanie they still have some similarities.

If evaluated properly, it’s very possible that with the threats she might have received according to Keyamo, she probably decided to back out from taking legal action or it’s also possible the official statement wasn’t released by her.

Festus Keyamo is known as a fearless lawyer who follows up a case till the end no matter how implicating or risky it might me that has earned him the popularity he enjoys today.

Secondly, why would Festus Kiyamo lie about handling a case which they know nothing about, knowing so well it could dent his image?

OMF also confirmed that Festus Kiyamo is the one handling the legal charges for Stephanie who had demanded 500m for damages from Apostle Suleiman over breach of agreement.

It’s obvious that Stephanie’s claims of not knowing Festus Kiyamo are false as she is intentionally hiding the truth.

Here is what she said: “Yes, I had an encounter with some officers, The Nigeria Police few days back; but I don’t remember making any such ambiguous claims against a reputable man of God in the status of Apostle Johnson Suleiman. Let the man of God alone please”

With the said comment, if truly disclosed by her, it is obvious that she is leaving some details behind such as, the encounter with some officers few days back was all about what?

It appears the Apostle is doing everything possible to silent this case due to his reputation, but it’s unfortunate because with the lawyer involved that might not be happening anytime soon.

So guyz grab your sit with your popcorn and relax while more shady details begin to unfold before our very own eyes.

Below is the official statement released by Festus Keyamo’s Chambers?