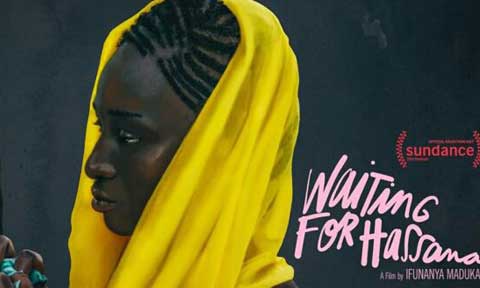 This is contained in a statement by Adam Segal, a representative of The 2050 Group – Publicity, obtained by the Correspondent of the News Agency of Nigeria (NAN).

The short documentary, the first Nigerian production ever selected to debut at the prestigious Sundance International Film Festival, focuses on the Chibok girls.

“WAITING FOR HASSANA is a powerful short documentary directed by Ifunanya ‘Funa’ Maduka and produced by Uzodinma Iweala and Ifunanya Maduka.

“It will premiere at the Sundance International Film Festival on Jan. 20, 2017.

“The short documentary, WAITING FOR HASSANA, tells the story of the Chibok abductions from a single perspective — a voice of one of the fifty-seven escapees.

“The film was shot over the course of 2016 in Nigeria by acclaimed Nigerian cinematographer, Victor Okhai.

“Nnamdi Asomugha, a Nigerian-American and former NFL cornerback turned producer, is the primary backer and executive producer on the project.

NAN reports that with 46,660 attendees in 2016, Sundance is the largest independent film festival in the U.S.

Held in January in Park City, Salt Lake City, and Ogden, as well as at the Sundance Resort, the festival is a showcase for new work from American and international independent filmmakers.

The statement quoted Maduka as saying: “This contained and intimate film introduces a new point of entry into the Chibok kidnappings.

“We know the global story, now we hear the personal one. As the director, my aim was to visually and sonically plunge audiences into the psychological and emotional landscape of our subject.

`My hope is that audiences will leave feeling inextricably linked to her life and her story – that it will become as much their story as it is hers.

“That radical intimacy is, to me, the basic and necessary function of art. It was also important to me that a Nigerian told this story, and I am proud that our crew reflects that drive.”

It also quoted Iweala as saying: “Within every tragedy there are incredible stories of resilience.

“When my mother came to me and said that people need to hear about the strength of these young women who have suffered the worst and yet still have so much to offer the world, I said I would help to get that story out there.

“WAITING FOR HASSANA is the result of a team of Nigerians dedicated to telling our own stories to ourselves and the world.”

It explained that WAITING FOR HASSANA is a film that seeks to reframe the narrative about the Chibok abductions by emphasising the strength and perseverance of an interrupted friendship that is both a source of profound pain and intense motivation to pursue a better life through education.

It said Maduka is a Nigerian American filmmaker and professional cinephile, with a penchant for world cinema.

Previously, she worked on the feature “Half of a Yellow Sun’’, and the documentary, “Building a Dream’’, it said.

The latter covered the Oprah Winfrey Leadership Academy for Girls, where she was a founding member and served as the Academy’s first dean of students, it said.

“Funa holds degrees from Cornell University and Harvard University, and waiting for Hassana is her directorial debut.”

The statement also said Iweala is an award-winning writer, filmmaker, and a medical doctor.

His first novel, “Beasts of No Nation’’, was released in 2005 to critical acclaim, and won numerous awards, it said.

Beasts of No Nation was translated into 14 languages and selected as a New York Times Notable Book, and it was adapted into the Netflix Film by the same name.

He is also the Editor-in-Chief and CEO of Ventures Africa, a Lagos-based news platform covering police, business, and culture in Nigeria, Africa, and the world.

Iweala is a graduate of Harvard College, Columbia University’s College of Physicians and Surgeons, and a fellow at the Radcliffe Institute at Harvard University. (NAN)