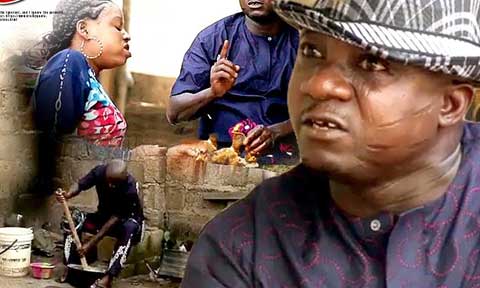 In a chat with Saturday Beats, Sanyeri said even though his tribal marks had put a limit to the kind of roles he plays in movies, it had also helped him to carve a niche for himself in comic roles.

“I started appreciating my tribal marks when I became an actor.

I know that due to my tribal marks, I may not be able to take up some roles, especially lover boy and romantic roles, much less compete with other good-looking actors in the industry.But you know God works in mysterious ways.

My tribal marks have brought many comic roles my way and that has automatically given me an edge as an actor. And that is why you won’t see me acting romantic roles.Even though as a child, people used to make a jest of me and I used to feel bad especially as I’m the only one with tribal marks among my siblings, I was never angry with my parents for giving me these tribal marks.

Right now, no one can mock me again because I’m now more comfortable with them and I have made a fortune with them.”

Recently, the actor suffered a leg fracture on set. In one of his recent movies, he was seen hacked with a cutlass, which made some of his fans ask if he now enjoys doing more stunts in movies.

“The last time I sustained an injury while on set, people thought I was trying to do a stunt, but I wasn’t, I was merely acting. In a recent movie, I played the role of a powerful man and someone tried to decapitate me with a cutlass, but because of the super power, the cutlass broke into two. It was just an effect, so there was no way it could have harmed me.

“Nigerians do not watch our movies because some of them are difficult. If a stunt man is used in a movie, it may not look real to them. They always prefer the actor to do the stunts. In the western world, for example, they may devise other ways of doing stunts, but here in Nigeria, we have to make it very believable because of our audience,” he said.

Asked how his wife has been able to cope with his life as a comic actor with many fans, he noted that his wife understood the nature of his job, including the risk that came with it.

“My wife understands the job, so she knows that every profession comes with its own challenges. Anytime I get injured on set, she tells me to be more careful. Injuries cannot stop me from doing my job. Women are naturally jealous, there is no woman that will see her loving husband surrounded by many ladies and not get angry or want to caution her husband.

“So, my wife equally gets jealous sometimes when she sees women around me, but I always make her understand that they are just my fans. I handle my female fans with wisdom because we can’t do without women in this world. I manage them well; each time they come to me to tell me they appreciate my work, I always give them a warm reception,” he said.

Sanyeri identified his talent as important, saying it helps him to make his wife laugh whenever she is angry with him.

“I am not the type of celebrity that likes to show off or live above my means, but I try my best to make my wife and children happy. My wife and I may appear like a perfect couple, but there is no perfect marriage because we are human beings. Anytime we quarrel and she gets angry, as a comedian, I try to use my jokes to calm her down. It works for me because my jokes actually make her laugh.

“I love my wife very much because she has brought peace of mind and joy to my life. Every woman wants to be appreciated, so I take it upon myself to hype my wife all the time,” he added.

With the advent of different social media platforms, some comic actors have used new media to further entertain their fans, but for Sanyeri, producing comic videos is not an easy task.

“I don’t do social media skits on Instagram because I don’t think it is necessary; I prefer to be on set; however, I post snippets of my movies sometimes. I may delve into skits later in life, but for now, I don’t believe in it; that’s why I don’t do it. I see it as overstretching myself.

“If I post skits on Instagram, people are not going to pay to watch them and producing comic videos is not an easy task. It can’t be done anyhow. If it’s a normal role, it will be much easier because once the audience watches a comedy scene the first time, it may not be funny to them again the second time. These are some of the reasons why I use the gift God has given me in bits, I don’t want to misuse it,” he said.