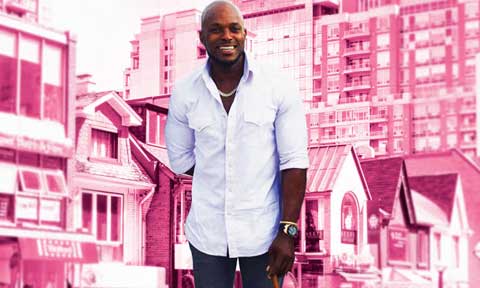 Such is his dexterity that he has been duped the play boy of Yorkville.

Johnson Chrome was born Adekunle Johnson Omitiran on January 31, 1980, in the Oshodi slums of Lagos, Nigeria. His father, Gbadebo, was a travelling businessman from southwestern Nigeria.

READ ALSO:  Our Glory Has Been Tied By Our Late Father --Late Oliver de Coque son Cries Out

The fraudster who called himself Johnson Chrome liked to sit on a bench at the intersection of Hazelton and Yorkvill, smoking a Montecristo Edmundo robusto and talking about fashion, cars and cigars to anyone who’d listen.

In a neighbourhood known for excess, Chrome was its most conspicuous consumer. He owned 90 pairs of shoes, a collection worth $100,000. One pair was made of crocodile hide and cost $10,000; another was encrusted with hundreds of tiny silver spikes. He wore watches so gargantuan that they seemed to drag on his arm.

One of them, the $150,000 Romain Jerome Moon Dust–DNA, contained actual moon dust and fragments of the Apollo 11 spacecraft and the International Space Station. His preferred suit style was Neapolitan—known for its soft con rollino shoulders, high collars and fabrics sourced from exclusive Ariston mills. His dress shirts cost $700, his sunglasses $800 apiece. His personal scent, Clive Christian No. 1, bills itself as “the world’s most expensive perfume,” and at $1,500 a bottle, that’s probably true.

When asked about the source of his wealth, Chrome would sometimes tell people he was an international businessman, in town for only a short time. One of his acquaintances assumed he was an oil tycoon. But police believe he was one of Canada’s most adept identity thieves, a major player in a sprawling $10-million fraud syndicate that victimized thousands of Torontonians for over a decade.

Johnson Chrome was born Adekunle Johnson Omitiran on January 31, 1980, in the Oshodi slums of Lagos, Nigeria. His father, Gbadebo, was a travelling businessman from southwestern Nigeria.

When Chrome was a boy, Gbadebo left Chrome’s mother, a Fulani woman from Nigeria’s north, and at one point allegedly had as many as six wives. Gbadebo studied at the University of Exeter in the U.K. and later found his way to Toronto.

Sources in Nigeria say he spent much of his childhood on the streets, getting shooed away from the local markets by vendors, who didn’t want a poor kid hanging around. According to one childhood friend, he wasn’t a troublemaker and had no criminal record. He later attended Lagos State University, and in 2003, when he was 23, his father brought him to Toronto.

Chrome enrolled at York University, where he studied economics and lived modestly in a basement apartment near campus. Less than a year later, police believe, he entered the world of fraud. In January 2004, Canada customs intercepted a suspicious parcel destined for Chrome’s apartment. The package had come from Nigeria, and it was heavy enough to qualify for inspection. Inside, officials discovered 36 envelopes addressed to various people in the U.S., each containing a counterfeit cheque for roughly $10,000.

These kinds of frauds are so popular in Nigeria that they’re now known globally as 419 scams, which refers to the section of Nigeria’s criminal code pertaining to fraud. Police claim that Chrome’s job was to mail the letters from Canada, bypassing the suspicions of U.S. Postal Service officials.

Toronto police set up a fake FedEx delivery to Chrome’s address. When he signed for the parcel, they arrested him and charged him with defrauding the public. Ultimately, however, the Crown decided they would be hard pressed to prove that Chrome was aware of the parcel’s contents, and the charges were withdrawn. By 2007, he’d obtained Canadian citizenship.

According to police, Chrome also developed another elaborate, highly profitable scheme, one that encompassed mail theft, identity theft and credit card fraud. First, they allege, he would intercept mail at condos in Toronto, typically buildings without concierges or front desk staff.

He’d enter the mailroom with a set of bump keys and try locks until one popped open, then repeat the process, scooping up as much mail as he could carry. Later, he’d open the mail, find bank documents, and record the target’s name, address and financial information in a notebook.

He would call the banks and impersonate the cardholder, trying to extract additional information, and update each profile in his notebook as he went. As he honed his scheme, he’d learn his victims’ dates of birth, phone numbers and email addresses. In many cases, he knew what car his victims drove, where they worked, and the names of their loved ones.

With that information in hand, he’d call the bank’s customer service number and, armed with enough intel to ace the security questions, request a new card. A day or two later, he’d stake out the condo building, wait for the mail carrier to make their drop, enter, and steal the envelope containing the new card.

Next came the spending spree. Often, Chrome would withdraw cash at an ATM or purchase prepaid gift cards. Chrome’s scam was labour-intensive—hustling for a few thousand dollars at a time—but therein lay its brilliance. Banks, though they won’t admit it, tend not to waste their time chasing small sums, which they can quickly reverse.

Despite their best efforts, police say, Chrome was able to continue his operation in plain sight—and no one could do much about it.

Chrome’s girlfriend from Nigeria, Olubukola “Bukky” Jegede, soon followed him to Canada. They married and eventually had three kids. By all accounts, Chrome was a devoted father, taking his kids to the park, the movies, and to church every Sunday. The family moved often—presumably to keep police from knowing his whereabouts.

Somewhere along the way, Chrome began using his middle name, Johnson, and sometimes went by Jay. As money began to flow in from his frauds, he explained to some friends that he worked for a moving company. Chrome also sent cash back home to set up a liquor store business for his mother in the Oshodi area. He later built two houses in the residential area of Abule Egba, in the north end of Lagos, and put his mother in one of them.

Finally, The Police found the stash house where he kept all his fraud equipment. Chrome's 600-square-foot condo was spartan, with a stunning view to the southeast. Before the police knew it, Johnson Chrome was on the run.

His friend, Brauti eventually convinced Chrome to turn himself in. On April 27, Brauti called the police and said, “I think I have a guy you’re looking for.”

Chrome was placed in jail for violating his bail conditions, though he could be let out again before his case goes to trial, which will likely take place in 2018. According to police, the Crown’s case is strong: they have evidence of Chrome’s broad network and his criminal proceeds, plus an epic history of failure to respect the court’s orders. Recently, there have been a few fraud cases where the accused receives a penitentiary sentence, which means at least two years. But the Crown is fighting gravity: many of Ontario’s prisons are already overpopulated, and there’s a limited desire to add non-violent criminals to the mix. It’s possible, even likely, that Chrome will escape serious punishment once again.