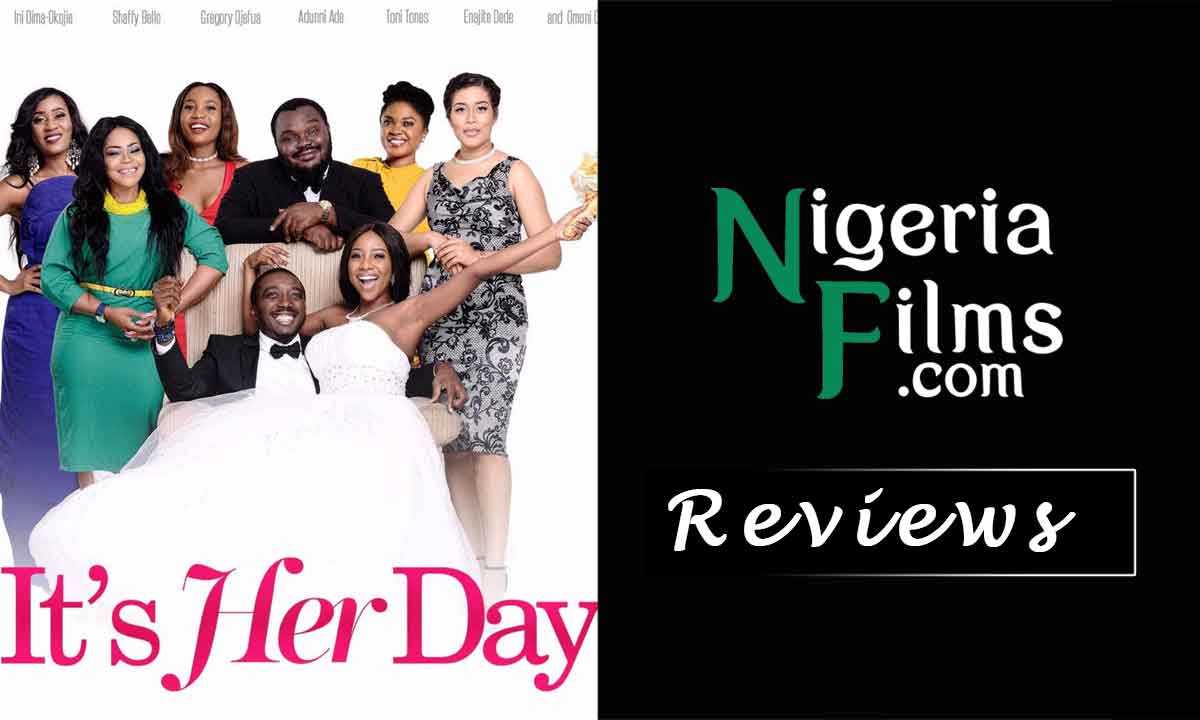 When a popular comedian makes a movie, or stars in it, say Kevin Hart for example, you look forward to it because, behind whatever the story has going, it would be plastered all over with bright colors of humor, the kind that births laughter that disfigures the face.

When a popular comedian makes a movie, or stars in it, say Kevin Hart for example, you look forward to it because, behind whatever the story has going, it would be plastered all over with bright colors of humor, the kind that births laughter that disfigures the face.

It gets amazing when you find that the story has something you can take home with, apart from hearty giggles, but even when it doesn’t, you still walk out of the cinema with a smile on your face from the good laugh you had, not because you just saw a great movie, but because you feel like you just returned from a comedy show.  This, exactly, is the feeling you get from the Bovi-produced It’s Her Day, directed by Aniedi Awah.

Victor (Bovi Ugbomah) is engaged to be married to spoilt millionaire brat, Nicole Hernandez (Ini Dinma-Okojie), who wants a fairytale wedding because of her sick penchant for e-approval . He isn’t an overly rich man, but he offers to sponsor the entire wedding to impress, because, well, ego. And maybe the I-just-come syndrome. And maybe something else we’d never know. So he begins to pay for every ridiculous thing the family demands, and he must do it with a smile on his face or his bride-to-be and her sisters will make trouble. His best friend, Omonigho (Gregory Ojefua), who is outrightly rejected by the Hernandez’s for his weight and outlook, advises him against it, especially because there is another woman (Angela) who loves him and used to be in a relationship with him. But at this point, Victor feels he is in too deep to back out, and so he goes along with the farce of a wedding, indulging his bride’s every pettiness.

While the story is not the most captivating, It’s Her Day has a number of high points. As you watch, you have to keep asking “How is anyone this stupid?” There is not a single indication of love between the couple. If there was, maybe it would justify Victor’s need to impress so much, the need to go along with a fake second proposal or a need for a wedding fixer who charges like she is building an empire. This, perhaps, is the highest point of this movie –Victor’s stupidity. When Victor’s friends mimic celebrities Wizkid, Davido and Tubaba, it is spot on, but makes you wonder by the reactions of the girls if people can be really that stupid. You ask that question a million times in different forms: can people be this daft? Can people be this gullible? Can people be this stupid? You keep asking this till the credits roll. It is a stupidity that annoys you but makes you laugh at the same time. You can almost not believe it, but the idea is not for you to.

Then there is the Hernandez family butler who stands around and says nothing, until the very last scene where he quits. He, with his interesting expressions, is another high point of the movie. And yes, it is brilliant acting to elicit that much humor without words. Femi Durojaye deserves a lot of props for this.

It’s Her Day snatches several moments of laughter without trying so hard, and this is why it would pass for a good film; the fact that it entertains. Other than this, the storyline dances all over the place. Victor goes back and forth, visits his ex and then leaves, and visits again, and leaves. Angela moves on, then doesn’t, then moves on, then doesn’t. In the world It’s Her Day is set in, everyone is indecisive. Even when Victor finally decides to call off the wedding, he still doesn’t seem certain he knows what he is doing.

The movie stars some big names of Nollywood. Shaffy Bello is Nicole’s mother, and while she wears her role like a hat, you wonder why she keeps saying “It’s her day” like we don’t already know the title. I wasn’t even counting and I heard that like three times. Najite Dede as Bovi’s aunty does okay with the way her waffi rolls off her tongue. Adunni Ade has not proven herself as an actress, and while her lines are laden with her confusing accent, it seems to fit this role perfectly. Omoni Oboli shouldn’t have been in this film at all. Toni ‘Tones’ Adefuye, Amanda Ebeye and Thelma Ezeamaka act as the sisters from hell, and they deliver as superficial young women who always have their way.  The resemblance between them is noteworthy.

If you’re looking for depth, or a movie that makes you think, It’s Her Day is definitely not the movie for you. It does the opposite, in fact, which is to make you not think at all, and just laugh and have a good time. It doesn’t promise anything other than that, and it doesn’t deliver more than it promises. Or less.