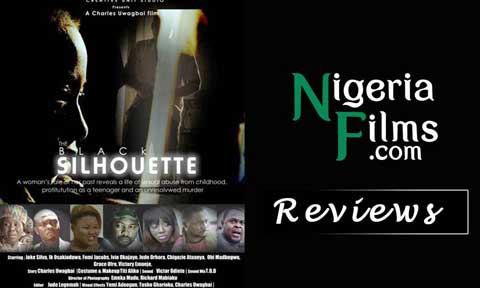 Cinema Review: Charles Uwagbai’s “The Black Silhouette” Is A Disappointing Package Of A Film

Cinema Review: Charles Uwagbai’s “The Black Silhouette” Is A Disappointing Package Of A Film

Joke Silva, aka Aunty Joke is one of Nollywood’s finest. Having spent many years in film and stage and basically everything TV, garnering recognition and local and international acclaim, she has made a name for herself that is sure to remain in the books of film for years and years to come.

And this is why, when we hear her name in any movie, we sit tight; it has got to be a darn fine show. With recent events in film however, watching as some big names manage not to impress in feature films, one cannot be so sure anymore. In 2015 movie The Black Silhouette for example, while Aunty Joke puts up a good act, the story simply does her no justice.

We have public figure Mrs. Maro Oti reminiscing over her life as she meets up with Eric Mobumba, a biographer, who would help write the memoir of her life. ‘For closure’, she says. And so it begins, a story, her story. She is a prostitute, trying to get the attention of a certain Doctor Charles Obi who comes to their bar and drinks alone every now and again. Then she is a student, driven into the arms of a predatory neighbor because of the many fights her parents have in their home. Then she is a young school leaver working as a sales girl and living with Tega, her armed-robber gonorrhea-peddling boyfriend who is eventually killed on one of his raids. Then she is back to being a prostitute who Doctor Obi now chases, trying to save.

This story is all too familiar. A girl sleeps around because she doesn’t have much of a choice; she needs to fend for her family and rescue them from the hands of an abusive father. Then a ‘good rich man’ comes to save her from that life. I wish the story didn’t have to be so basic, but it is what it is, and the many attempts to appeal to the viewer’s emotion seems only to fall flat to the ground. The only place where this really works, and a good place for that matter, is its final scene where we realize who really was her ‘first’: her father. It is not like we didn’t see it coming, but the way it is revealed creates the desired effect to grip at your heart for a short sad minute. And just when it is about to induce a two-fingered applause, the director introduces a very cliché end note about how an almost irrelevant character was apprehended by the police.

Talking about the director, Charles Uwagbai (who also came up with the story) is probably to blame for how poorly this entire film pans out. Ivie Okujaye as the young Maro is brilliant. She is soft when she needs to be, fierce when she needs to be and even though her pidgin English is a little rough around the edges, she still pulls off the street girl role well enough to light up the screen. Femi Jacobs isn’t always exceptional, but he doesn’t do badly on this one, and neither does Jude Orhorha as Tega. Even IK Osakioduwa as Eric is satisfactory, and to say Aunty Joke was amazing is me just preaching to the choir. So what was off about this film? Its very ordinary story and its poor directing, scenes that do nothing, scenes that are very poorly arranged, scenes that are blurry, cut short in the middle unnecessarily and a soundtrack that makes you want to bash the TV, all of these make The Black Silhouette a disappointing package of a film.

That it is titled The Black Silhouette already gives it away as one that isn’t properly thought through. A Silhouette is always black. An opaque object blocks the penetration of light through it and creates a silhouette, so naming anything a black silhouette is like saying ‘a wet rain’ or ‘a female girl’. The movie’s timing is also quite off but I can’t say too much of it, considering that the present in the movie might actually be sometime in the future. Else, one would have wondered with the dressing and GSM phones that were shown at a time that could have been the eighties at best. And don’t even get me started on that very wacky shooting scene that reminds one of old films where people had to jerk their hands forward to show they were shooting.

The Black Silhouette is all kinds of disappointing. It is the kind of film you set out some alone time to see because of its cast only to find that it really isn’t special. And this is all on the director who pays very little attention to the details that could have made it fair. It doesn’t flatter Aunty Joke one bit, and I can only hope she never stars in this kind of film ever again.