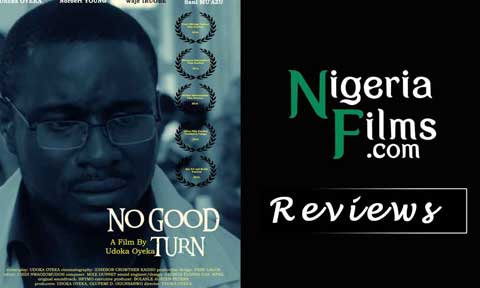 Written and directed by Udoka Oyeka, 2016 short film No Good Turn tells a tale of Doctor Gbenga Jakande whose hospital experiences a sudden influx of badly injured people on a day he is on duty, one caused by a bombing at central locations of the city.

Written and directed by Udoka Oyeka, 2016 short film No Good Turn tells a tale of Doctor Gbenga Jakande whose hospital experiences a sudden influx of badly injured people on a day he is on duty, one caused by a bombing at central locations of the city.

The horror of these injuries bites him right in the heart –and bites us too– so much that he rushes to his office to have a drink. His salvation by alcohol is disrupted by an older doctor who comes to him for solace. They both admit they have seen nothing like it before.

While they lament and wonder, a police superintendent bursts into the hospital, torn uniform and all, looking to murder the suicide bomber who let out the bomb that caused the upheaval. He is flanked by two soldiers who do not hesitate to gift cautionary nurses hot slaps that shut them up. It is revealed, later, that the superintendent is distraught because his son-in-law was among the casualties of the blast and he must now go and give his daughter the heartbreaking news. Gbenga ensures he doesn’t harm the young boy.

Business returns to normal soon afterwards, until someone hurries into Gbenga’s office to give him news that his pregnant wife was in the market when the attack hit it. This is what breaks him, and even alcohol cannot save him now.

No Good Turn shows. It does so much showing that if the words had been completely taken away, we would still understand what is going on, and this is an amazing thing. The emotion is genuine, and the irony in the fact that it is easier said than done plays out perfectly in this case. You ask yourself, if this had befallen someone dear to your heart, what would you have done? It is particularly alluring with its length, which does so much in so little time as opposed to many feature films that stretch and stretch. It suffices to say that if No Good Turn had been a feature film, it would have been less powerful, less poignant and less appealing. The straight-to-the-point approach of it gives it ten times the life.

Apart from its cringe-worthy graphic display of open wounds and amputations that could make you upchuck your breakfast on your dining table (and this is not bad in itself because it is as real as it gets), No Good Turn is a delight to watch, and not for its feel-good effect, but for the issue it addresses. It brings the Boko Haram insurgency matter closer home, away from statistics and news headlines to a place right in your heart, a place that really is the heart of the victims.

Udoka Oyeka does a fantastic job with No Good Turn as the writer, director and lead actor. It is produced by Bolanle Austen-Peters, who also co-produced 2016 film 93 Days. The music by Brymo, “In the City”, which is the official soundtrack of this short film is another one of its many highlights. Supported by good acting from Nobert Young, Waje Iruobe and Sani Mu’azu, and makeup that makes you gasp, Udoka brings the film to life and earns a big round of applause (and hopefully, some awards) for a job well done.