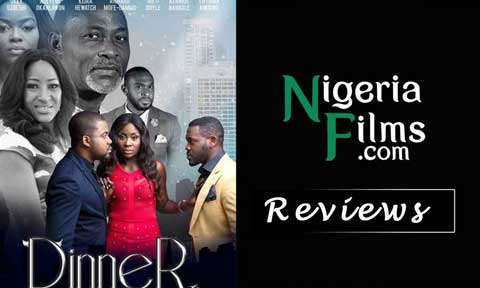 I honestly believe that if Jay Franklin Jutiboh’s Dinner was made as a short film instead of a feature it would have been at least a half decent movie, but it wasn’t, so it isn’t.

I honestly believe that if Jay Franklin Jutiboh’s Dinner was made as a short film instead of a feature it would have been at least a half decent movie, but it wasn’t, so it isn’t.

Dinner exists because the thinnest possible premise was strapped unto a rack and stretched to near mind numbing lengths until a story that could’ve have been told in twenty minutes ended up being dragged along for a hundred.

The film introduces us to Mike (Okey Uzoechi) as he has his marriage proposal rejected by his then girlfriend. We learn of his fear of commitment and the panic attacks that comes as a result of that fear. Back to the present, we are introduced to Mike’s new lady, Diane, played by Keira Hewatch, and learn that they are on their way to Lagos from Abuja to attend a dinner at the home of his childhood friend, Ade (Enyinna Nwigwe) and his soon to be wife, Lola (Kehinde Bankole). Also attending this dinner is Ade’s employee and friend Richy, played by Deyemi Okanlawon, a by the books “bad boy” who looks like trouble from the first time he’s seen on screen lying in bed with one woman while chatting up another.

Mike and Diane arrive at Ade’s place for dinner and after a little small talk, they start prepping for dinner. We get a sense that something is bound to go awry; from Diane’s strange behaviour around Ade to Mike’s hyper-enthusiasm about everything Diane. You can almost smell the storm coming to take all that joy away and reveal all that is obviously being hidden. That storm comes in the form of the pompous, “Mister steal your girl” Richy. Over the course of and immediately after the dinner, secrets are revealed and the strengths of the relationships of everyone involved are severely tested.

Like I already said, Dinner is stretched to lengths that its story simply cannot handle. This leaves many points in the film where almost nothing is happening and whatever is happening is either not interesting enough to watch or doesn’t need to be seen at all. Also, there are long winding dialogues between the characters that are intended to raise the tension on screen and prepare the audience for something monumental, but all of it ends up being moot since every major reveal in the film was already either said outright or very obviously implied by the thirty minute mark, meaning that every revelation that the film expects you to be shocked at upon being brought to light loses all of its weight at the time that it is “revealed” to all.

This stretching of story and lack of narrative tension leads directly into the film’s pacing problems. I understand that it was made to be a “slow burner” but this took it a tad too far as the film ends up being rather uneventful and for lack of a better word, boring. Scenes end two minutes too late and all the slow movement has no real pay off.

For all the problems that this film has, the one that is the most jarring is the seismic tonal shift that occurs in its final third when the film goes from being a slow burning thriller to a sappy, run-of-the-mill 90s style rom-com. This confusing tonal shift takes Dinner from Unfaithful to Notting Hill in a hot second, betraying not only the story it was telling, but also the characters in that story. Writer/Director Jay Franklin Jutiboh, in an attempt to lighten the mood and give his characters a happy ending, sacrificed the opportunity to bring their stories to a satisfying and honest end.

Add to all this, a score by IBK Spaceship Boi that is the epitome of the phrase “on the nose” and Dinner becomes almost unbearable. However, the impressive acting performances from the entire cast manage to lift the film up off the ground and to a certain degree, polish this turd. Especially the performance of Enyinna Nwigwe, who I believe will become a huge name in Nigerian film if he picks better projects, and with the exception of Richard Mofe Damijo, who was in the film for a total of about five minutes and still managed to give the laziest performance of the entire cast.

Dinner has some good ideas and if executed properly, would have turned out a lot better than it did. I attribute this to the inexperience of writer/director Jay Franklin Jutiboh who, I believe told the wrong story in the wrong way and then betrayed that same story in order to arrive at an unearned and tone deaf conclusion.