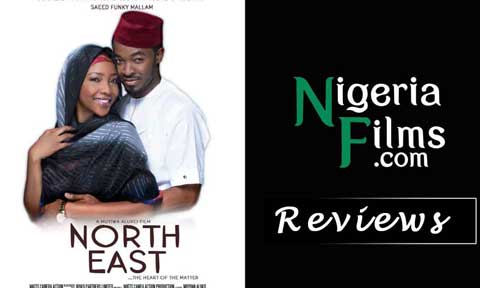 Before hitting play on this gem, I went back to the coming soon post that we had initially created for it on NR and I reread the synopsis. Somewhere in there, it says something about an “Igbo Christian” falling for an “Hausa Muslim”.

Before hitting play on this gem, I went back to the coming soon post that we had initially created for it on NR and I reread the synopsis. Somewhere in there, it says something about an “Igbo Christian” falling for an “Hausa Muslim”.

My eye didn’t twitch much for the Igbo Christian, but as for the Hausa Muslim phrase, a part of me thought that was a bit redundant. I really needed to take a moment to think on that and realize that this is something I know to be true: all Hausa’s are not Muslims, yet it felt weirdly redundant reading the phrase.

This was my ignorance that even I was not aware of and the movie explores more on that as it tells the story of an Igbo Christian physiotherapist, Emeka (played by O.C. Ukeje) who indeed falls for his Hausa Muslim patient (Hadizah played by Ini Dima-Okojie). Upon introduction to the parents (played by Carol King and Gbenga Titiloye), they realize that their parents were already in a relationship with each other, so then it becomes even more confusing when the father of the girl is entirely opposed to the relationship.

Prior to the drama developing, the movie does have a little bit of a slow kick-start. It is not slow in the sense of Shirley Frimpong-Manso slow (I hate to turn that into an adjective but it is what it is), it is just slower than the typical. If you’ve seen “Love Regardless“, (a movie by the same filmmaker) then it is a similar type of slowness but actually improved this time.

In the beginning, you notice Gbenga Titiloye’s attempt at a Hausa accent. Initially, it is confusing because it is hard to reconcile. The character of Musa doesn’t really show forth until the halfway point. Prior to that, we just see Gbenga putting up a front and saying things ‘differently’ and acting ‘weirdly’ but the conviction of the character doesn’t show up until the conflict arises and he has to don his ignorance.

Somewhere in the middle of Musa’s character being vehemently opposed to the relationship, I just wished someone would ask him “why is it ok for him to date the Igbo woman and not for her son to date his daughter?”

As the movie started and the plot was developed, I didn’t understand the need for the relationship between the parents. It seemed redundant and corny at best. However, as you keep watching, you realize that the writer uses it as a tool to expose the ignorance.

I hold that the sub-heading of this movie should have been “ignorance permeates”. This is because as we can see from Musa, even the most well-learned and most “cultured presenting” person can have ignorance within them that even they are not aware of. If there’s one thing I took from this movie it is that ignorance is not a ‘they’ problem, it is a ‘me’ problem. We are all ignorant in some shape or form and we each need to tackle our own ignorances and biases first before pointing at others.

So clearly the biggest gem of this movie was the writing especially in the discussion that it brings forward. Asides from that, the next best thing about this movie was definitely O.C. Ukeje. I pray that every leading man should be so fortunate as to be able to “confess love” as well as he does. Ini Dima as our female lead does well in matching him. 95% of the time she is right there, however, there are moments where you want to pull her back and remind her that all that forcing isn’t necessary. Then again she has those moments like her “us/they” speech where she breaks you.

Asides from the talking points and the performances though, it’s sad to say that this movie really isn’t winning in any other regard. It is hardly original and barely scathes away with some points on predictability. To make the movie “great”, there were many different points that could have been made the central focus along the line but weren’t.

The production of this movie was not without its flaws. There were scenes with no audios and scenes with inconsistent audio. Then there were the moments where it felt like the issues presented could have been tackled more (but then again there’s only so many minutes available).

All in all, “North East” really is simply a cheesy romance that only wins because of the valid points it makes and conversations it starts.

“North East” tells the story of an Igbo Christian physiotherapist who embarks on a romantic relationship with one of his patients, who is a Hausa Muslim, only to face vehement opposition on the basis of religion and tribe from her father.

"you want to affiliate us with Igbo people? They blame us for all that is wrong with them" "there are good and bad people everywhere north, South, east and west, Christian, Muslim and atheist."

All in all, "North East" really is simply a cheesy romance that only wins because of the valid points it makes and conversations it starts.