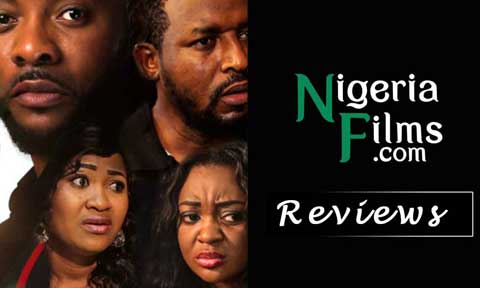 When you look at the cast lineup for this movie from Bolanle to Jackie (let’s even put Mary aside for a moment) you would not expect that this is the kind of movie that would have opening credits that last nearly 5 minutes (I honestly did not know that we still do that).

When you look at the cast lineup for this movie from Bolanle to Jackie (let’s even put Mary aside for a moment) you would not expect that this is the kind of movie that would have opening credits that last nearly 5 minutes (I honestly did not know that we still do that).

In essence, Walking Away is an Asaba movie dressed as a new Nollywood movie. This is not intrinsically a bad thing, it becomes a bad thing when you spot technical things like wavering video quality, generic score music, and soundtracks that re-narrate the storyline.

But I digress, Walking Away follows the issue of domestic abuse especially in the lives of two friends. Jackie Appiah’s character is in a long-term live-in relationship with a boyfriend who keeps attempting to make her his wife but she continues to refuse for unknown reasons. Then there is Mary Remmy’s character whose husband initially begins by spontaneously randomly hitting her (I guess you can call it “mistakenly”) in his moments of anger.

As we watch, we learn that Jackie’s character’s reluctance towards marriage is due to bruises (literal and figuratively) from a previous relationship. Also, as we watch, we see Mary’s character’s husband’s supposed casual abuses turn into a habitual thing while his wife makes excuses for him.

It is clear cut that the writers are very focused on making the case for everyone’s point of view. This is why we see a focus on Mary’s character defending her husband and blaming herself and we also see her husband blaming her for the abuse. We see Jackie ex still blaming her and we see the effect this has on her new relationship. As far as ‘making the point’ and ‘highlighting the evil’ goes, the writer definitely succeeds. However, sometimes it is too obvious to the viewer that this scene was created to prove a lesson, whatever that lesson may be from scene to scene. Such as “don’t make excuses for the abuse” or “don’t pass prior hurts to new relationships”. And in case somehow someone in the audience managed to see the entire movie without getting these points, there’s an entire monologue/sermon at the end to reinforce the purpose of the story.

In essence, as far as preachiness goes, the movie is definitely preachy. On a ‘preachiness’ scale of 0-5, 5 being the most preachy, this movie is a solid 3.

As initially mentioned, Walking Away, is definitely an Asaba movie dressed up as a new Nollywood film. This is evident in the wavering video quality, the soundtrack, unnecessary flashbacks, the length of the opening credit and the movie as a whole (it’s essentially two parts in one) as well as that silly climax scene that attempts to reenact too many foreign movies (the gun fight scene).

The major win of this movie aside from the morale of the story is in performances. Let’s knock it out real quick with Mohammed Yakubu’s performance first though. Initially, it was annoying that he was playing this strong abusive man yet he had not managed to become strong in his acting yet. As the movie went along, either his performance got better or we got accustomed to his skill.

Otherwise, the cast of this movie does a great job holding the storyline together. It is pleasant and almost delightful actually to watch how much Bolanle continues to improve as an actor, and Mary Remmy is rock solid as always while Jackie Appiah holds her own.

In the end though, Walking Away is cohesive and definitely relays the message it intends to just with a few setbacks.

Two women, experience domestic violence in their respective marriage’s from their husband’s. One of them walks away from the torture and pain, while the other decides to stay and save her marriage at all cost. It’s a tale of romance and domestic violence.

When he brings her a glass of champagne and she asks what are we celebrating and then he says "my heart which is in you". Then she drinks and spits out a heart shaped ring which was in the drink which was in her.... :D

The morale and some performances