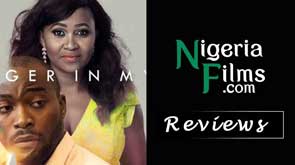 “Unexpected” best describes “Stranger in My Bed”! Life happens and most of the things we experience in life are unexpected. The people we trust the most are sometimes, those that disappoint us the most.

“Unexpected” best describes “Stranger in My Bed”! Life happens and most of the things we experience in life are unexpected. The people we trust the most are sometimes, those that disappoint us the most.

An influential elderly man Toyin Taylor (Jide Kosoko) is married to a younger woman, Eve (Moyo Lawal) who he does not trust, he wants a divorce but he needs concrete evidence to file for a divorce. He does not want her to cart away with his riches or anything he has spent years working to gain and so he hires a beautiful and highly intelligent young lawyer, Faith (Mary Njoku) to find him evidence of his cheating wife. Faith who is newly married and trying to balance career and her husband sends a colleague to find details to start the divorce proceedings. What her colleague finds is something Faith does not expect. It does not just get Chief Taylor divorced, it also gets Faith divorced.

Rita C. Onwurah helms the affair of “Stranger in My Bed”. The film starts out very interesting. It starts out with a radio presenter asking his listeners an important question about men and the first caller gives a very interesting view on her experience with relationships. Faith seems to have it all under control, a thriving career and a husband that loves her. What she does not expect is that a job she will be hired for will lead to a deeper revelation about her marriage. She takes the job as a means to a better life, especially, to promote her Law firm. She is reluctant about trailing another woman to further her career but she ends up doing it and it ends up being a curse and a blessing.

The writing is smooth and quite intriguing, it is clear from the first time we meet Eve that she is cheating on her husband and we expect that Faith will find the proof Chief. Like most films, where older men marry younger women and have sleepless nights being bothered about what the women are up to, this one is different. “Stranger in My Bed” does not focus too long on an insecure older man married to a very young woman. Chief is concerned about his properties- his wealth and he wants a divorce as quick as possible. He can let go of the woman but not his money. This is not as a result of greed but because he wants to teach her a lesson, that marrying an older man is not a sure path to a life of wealth with no hard work.

That being said, we can assume that Eve cheats because she is not satisfied with her marriage to an older man. What the writer does not develop is why Faith’s husband decides to cheat on her. Through to the last scene where he begs for Faith’s forgiveness the writer does not give us a reason why. We cannot even guess his reason because everything we see on screen between Ade (Seun Akindele) and Faith is perfect. They have a happy marriage. Faith spends as much time at work as she does at home. In fact, the busy one in the relationship is Ade. He travels frequently for work or as we later find out, to spend time with his lover.

It is intriguing to watch the story unfold. Stranger in my bed has all the characteristics of an enjoyable film.