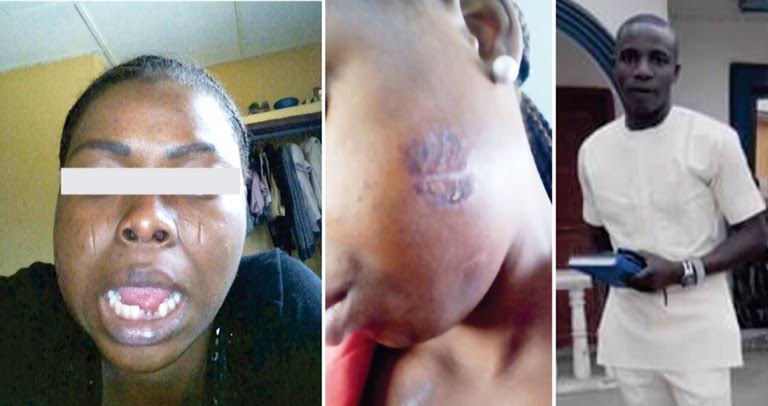 According to The Nation, National Youth Service Corps headquarters Abuja is yet to officially respond to corper Temitope Adedewe was battered and lost two to hammer after been attacked by a male copper, Oluwabusiyi Adeola Bolarinde.

As if what she experienced was not enough, she had to deal with NYSC who has intentionally withheld her discharge certificate for breaching the NYSC code of conduct by reporting to the police.

She also disclosed that the copper who attacked her, Bolarinde is already studying for his master’s degree at the University of Ibadan, which could not have been possible if he didn’t produce his NYSC discharge certificate.

Narrating how her ordeal began, she had this to say:   in June of 2015; Bolarinde started making advances at me. We had known from our undergraduate days at the History Department of OAU, Ile-Ife, but I have always stayed away from him because he is the aggressive type. The first time I spoke to him was when we were in camp. Both of us got posted to the same LGA and place of primary assignment, giving Bolarinde the opportunity to start pressing me for a relationship, because we were also staying in the same lodge. With every attempt to woo me failing, he suddenly decided to make my life miserable and he resorted to insulting me at any given opportunity and I do return the insults at times, and ignoring at other times. Matters later got to a head one day, after i told him to stop threatening me via Whatsapp, and Bolarinde  came into my room and started beating me with his belt. He later picked up a hammer banged it on my mouth, making me lose some teeth.

Until now, NYSC is yet to say or do anything regarding the issue as the accused has also refused to say anything quoting that the NYSC conduct does not permit him to speak to the press.