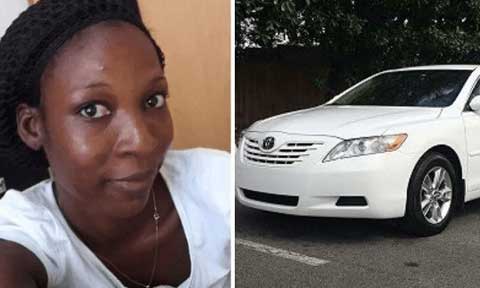 The house help, Helen Wilson, was tracked on Tuesday to a location in Benue State through her Facebook post, where she was apprehended by some military officers alerted by her boss, Aisha Bulama.

According to Punch, the Adamawa State indigene had been working for Bulama for the past five years at her house in Block C6, 1004 Estate, where the incident happened.

The boss was said to have travelled to Kaduna State for a wedding last week when Wilson, together with her boyfriend, one Martins, drove the 2009 model car away.

A neighbour, who noticed that the car was not in the usual parking lot, alerted Bulama that her car had been stolen.

Bulama, who spoke with Punch on the telephone, said the case was reported at the Victoria Island Police Division.

She added that the suspect was caught on Tuesday, adding that the vehicle had been recovered.

“She was formerly working for my friend, who travelled out of the country. I decided to employ her and she had been working for me for the past five years without any record of blemish. In fact, I cannot say anything bad about her because she is the best housemaid one can ever have.

“I travelled for a wedding and left her with the car key. A few days later, my Indian neighbour called me and asked if I told somebody to pick my car and I said no.

“I immediately called her and asked why my car was not at the parking lot. She said it was not true, that the car was right there. A few minutes later, she became unreachable on the phone.”

She said her neighbours went to report the case to the police, which launched a manhunt for the suspect. Bulama said she later learnt from Wilson’s friend that she hatched the plot with her boyfriend.

She said the car was tracked to somewhere in Lagos where it had been sold for N2.6m, adding that the buyer transferred the money to the suspect through e-banking.

Wilson was said to have later updated her Facebook page, posting a snapshot of herself.

“She was arrested together with her boyfriend around 9am on Tuesday in Benue State. They had been moving around different places after selling the car. She then posted a photo on Facebook, which I forwarded to London.

They gave me the location where the photo was taken and I sent the soldiers there; they got her arrested. When I see her, I wish to ask her why she did it.”