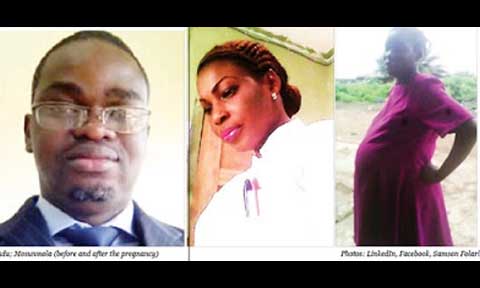 The 28-year-old gave birth without any complication at the General Hospital, Epe, Lagos State, on Thursday.

Recall that Mosunmola and her lecturer, Dr Seyi Adu, had a sexual intercourse in a hotel sometime in August 2016.

While Mosunmola claimed that she was coerced into the relationship by Adu after she failed his course, Adu said he was seduced by the his student whom he never loved or dated.

After lecturers, the head of Adu’s department and provost of the health college tried in vain to mediate in the matter, the case was taken before the ministry of justice.

An official in the ministry was said to have brokered a deal between the parties as Adu agreed to be paying Mosunmola a monthly allowance of N5,000.

The agreement reportedly broke down in March,2017 when Mosunmola presented a list of baby items which she valued at N50,000. Adu was said to have turned down the request.

Punch correspondent reported that matters came to a head when pregnant Mosunmola, who claimed to be an orphan, confronted Adu during a lecture, which resulted in a fight.

She was said to have reported a case of assault against the lecturer at the Ilese Police Division.

Mosunmola had lamented that she was due for delivery in May, but had yet to procure baby materials.

After PUNCH Metro tried in vain to reach her since last Monday, a call to her phone eventually sailed through on Thursday.

After exchanging pleasantries, she told our correspondent that she was delivered of a baby boy on Thursday.

“I gave birth to a baby boy this morning (Thursday) at the general hospital. It was a normal delivery without any complication. I started labour around 12am (Thursday). I first went to a herbal home, but when the traditional midwives could not handle it, they took me to the general hospital around 5am. I eventually put to bed at about 6.30am.

“The leadership of the church, where I have been, staying has shown me support. They brought food to me this morning. I cannot repay them for their help.

“I called Adu’s family members this morning to break the news to them. I also called him and he thanked me for turning him to a star. We were still talking when my phone battery went dead. I used someone’s phone to call him back and asked him to call me on that phone, but he refused. I could not charge the phone battery on time due to the power situation in my area.”

Mosunmola told our correspondent she owed hospital bills which totalled about N20,000, appealing for support from well-meaning Nigerians.

When our correspondent called Adu, who already had two girls with his wife, and asked if he was aware of the development, he declined comment and terminated the call.

The Ogun State Commissioner for Health, Tunde Ipaye, said the committee set up to investigate the matter had turned in its findings, adding that it was discovered that the matter had been mediated by the Citizens Right Department of the Ministry of Justice.

He said,
“From investigation, we discovered that the lady was indeed a student where the lecturer taught. But when the affair started, she had finished from the school. There was disagreement between them on who was responsible for the pregnancy. The lady had claimed that another man was responsible for it, but that she needed money for her upkeep. When communication broke down between them, she insisted that the pregnancy belonged to the man.

“She went to report the case at the Citizens Rights Department, Ministry of Justice, Ijebu Ode. The office mediated with a written Memorandum of Understanding which was signed by the parties. The man agreed to be paying her N5,000 every month.

“The man has been fulfilling his part of the bargain since that time. The lady then demanded N250,000 for accommodation, which was not part of the agreement, and the man refused. He said if the baby turned out to be his, he would accept it. These are all documented.

“Although there are ethical issues, their agreement seems to have negated the ethical concerns because they have also signed the MoU and the man had accepted to take responsibility, including informing his wife.”

A top source at the General Hospital, Epe, confirmed that Mosunmola had been delievered of a baby boy.

“She was delivered of a baby this morning. It was a normal delivery and there was no problem whatsoever. Both mother and child are in good health,”he said.