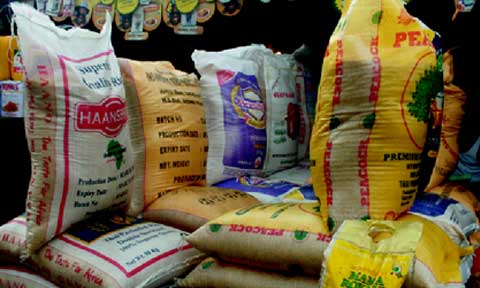 The suspect, now on the run, reportedly accosted the victim (names withheld), weekend, at Prince Bus Stop, Isheri Oshun, while on the errand for his mother. He was said to have introduced himself to the unsuspecting boy as a relative.

In an apparent move to convince the boy, the stranger, followed him to the shop where he was sent to buy a bottle of groundnut oil and thereafter, took him to a shop where he collected three bags of rice.

READ ALSO: Billionaire kidnapper: Why it was hard for police to arrest me for many years – Evans

He convinced the salesgirl, identified simply as Deborah, that he was going to get the money, while his brother remained with her. However, that was not to be as the salesgirl waited endlessly without seeing the stranger or the money for the bags of rice, which totalled N48,000.

Speaking with Vanguard, the salesgirl said: “ When the man came to the shop with the boy, he asked how much was a bag of rice. I told him it was N16,000 and he left with the boy, saying he was going to tell the woman that sent them. “Moments later, he came back and said that he needed two bags.

Again, he called the purported person that sent them on phone and suggested that they should add one more bag.

“After the call, he told me to help him get a tricycle that would convey the three bags of rice to Fire Junction, where he claimed the owner was. He said the boy will remain with me while he went to get the money.

“After waiting for close to one hour without seeing him, I told the boy to take me to his mum’s shop at the said Fire Junction.

“But he said that his mother did not own a shop there and that the stranger only met him on the road and brought him to the shop.

“It was at that point that I knew I had been robbed. I alerted my neighbour, who said that the stranger must have used the boy as exchange for the bags of rice.”

Meanwhile, apprehension had set in at the boy’s house after his disturbed mother visited the shop, only to be informed that his son had left with a stranger. While a search party was combing the vicinity for the boy, the owner of the shop and the salesgirl, were sighted taking him to the Isheri-Oshun Police Division.

During interrogation, the boy told his parents: “After returning from the shop, the stranger asked if I knew where they sell bags of rice. I told him they were selling close to our house.

“But he said he did not want to buy there that I should follow him to buy elsewhere.

“I followed him because he introduced himself as my cousin. He collected the money I had with me to pay for the fare and told me to wait at the shop, that he would come and take me back home after dropping the bags of rice.”

The Police, however, released him to his parents same day with a directive to report back to the station yesterday, where a meeting between the boy’s parents and owner of the shop who insisted on getting the money for the bags of rice.