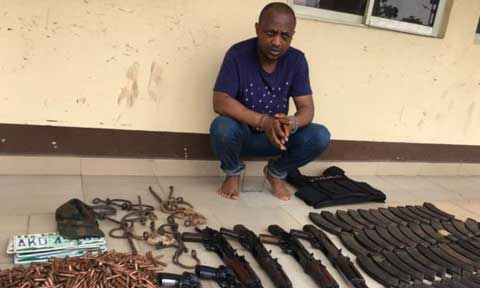 According to him, this to disapprove a rumor flying in the air that the police alleged that he was injured during a disagreement he had with his members because of money issue.

He disclosed this in an interview he had with the New Telegraph, saying that his father and step mum were the cause of what he is passing through currently.

“It happened in 2008. A friend of mine invited us to come and make peace. They were having issue of money. When we got there, he started shooting everybody.

“The matter was between Emeka, Iyke and others. I tried to intervene and Iyke started shooting everyone. He shot so many people. Nothing led to it! I told you it was an issue over money.

“It was not a bank robbery. The major issue was between Emeka and Iyke. It was Emeka and Iyke that were having issues. Along the line, myself and others decided to intervene in the matter.

‘’Iyke now decided to call everyone in order to make peace. But on getting there, Iyke and his friends, Jude and Humphrey, started shooting at us.

“I wasn’t shot on my shoulder. I was shot on my hip (Lifts his shirt to show the scar). They were having issue over sharing of money.

“It was money they made from robbery. The money was from robbery of a filling station. They said they went to Con Oil Filling Station in the night to rob. It happened in 2008.

“No! I didn’t go. I was not part of them. I was called to come and intervene in the issue, to make peace. Iyke called his friends to come and take their share of the money after the robbery.

”Later, Emeka now called me that they were having problems with Iyke seriously. He said that Iyke didn’t want to give them their share of the money.

‘’Emeka said that Iyke carried out the operation with his instruments (weapons) and as such, Iyke was supposed to give him part of the money. But Iyke didn’t want to share with Emeka, so I was called. It was supposed to be a peace talk.

“I was shot by Iyke. I can’t really say how many people he shot and killed on that day. I only know that after he shot me, I ran out of the place.”

He said he is one of the six children his mum had for his dad, who also had another wife, both of whom he blamed for his predicament.

“I’m the first son. My father will not tell me today that he trained or catered for me. But if there was any way my father and step mother wronged me, I have forgiven them.”