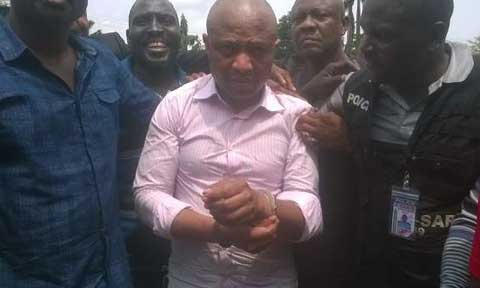 Saturday Sun has however gathered that Evans is not dead as his family now fears but has been moved from the Lagos police command headquarters cell by about 30 heavily armed men at midnight few days ago to an undisclosed destination.

Some senior police officers in the know told Saturday Sun he was moved to Abuja Indeed, in the last few days, a palpable silence seemed to have enshrouded the Evans phenomenon.

Where is Evans? It is a question the police is not prepared to officially answer right now. A man who hitherto divulged the details of his criminal life to the public almost on a daily basis is suddenly no longer accessible to even the press corps.

All a Saturday Sun reporter who visited the state police command was told was that Evans is no longer allowed to talk to the press till further notice. The secrecy surrounding his whereabouts in the official quarters baffles those who have closely followed his story since his arrest.

After days of sniffing around the Lagos police formations to get information on Evans whereabouts, it was gathered that the kidnap kingpin had been moved out of the Lagos command headquarters days ago by heavily armed policemen and is yet to be returned.

Police had last week said they had got a court order to detain him for three months to give them enough time to complete their investigation. This followed two suits filed by Evans lawyer, Olukoya Ogungbeje, at the High Court seeking his release and claiming N300m damages from the police.

Some senior police officers who spoke to Saturday Sun on condition of anonymity expressed fears that Evans might not make it to the court.

They argued that he might plot his escape from prison, or get across to some of his members who are still on the run. Their concerns are not farfetched, given that several inmates in the past had reportedly committed much heinous crimes even while in prison.

Some of the officers confirmed that Evans was no longer in the police cell in Lagos. “He has not been returned since he was moved out. Evans is a broken man; police can’t resort to extra-judicial killings at this point. He is cooperating, and he is ready to help return all his ill-gotten wealth as soon as possible”, one of the officers said.

Another reliable source at the police command told Saturday Sun

“Evans is not an ordinary criminal. I guess that they took him out for further investigation but I don’t know why they are yet to return him to his cell.” The source further assured: “No one is planning to kill Evans. I believe that they will return him later. He could be in any good cell in the state for security reasons, but I can assure you that he is not dead yet. Even if anything happens to him, if he dies in custody, it will be as a result of cancer which he claims he is suffering from.”
Yet another senior police officer who preferred anonymity assured that Evans is okay.

“He is okay and seriously cooperating with the police in its investigation. From the look of things, he might not spend up to three months in detention before he’s charged to court. As for his location, I assure you that he is in a protective custody somewhere out of town.” The officer who reinforced fears within the police circle, said that “a criminal is always a criminal,” adding that, “with the number of robbery cases and kidnappings to his credit, he is well known among criminals.”
He told Saturday Sun:

READ ALSO: Evans mansion in Ghana, $75,000 gold ring recovered + he sent N20m to his wife 4 days before his arrest

“Within the short period that he spent in our cell, he is already controlling inmates in the cell. They fear and respect him; we do not want to run the risk of allowing him to form another notorious group which is common amongst them.”

On why his family is yet to get access to him, the officer said that they are yet to approach the police.

“A lot of his family members benefitted from his ill-gotten wealth, so they are afraid to come close to the police station.

Evans confirmed that he bought a car for his father and also gave him N3m. The police will recover such money and properties.

We will soon get a warrant to pick his father up and possibly his mother, who also benefitted.”

Calls and text messages to both the Lagos Police Spokesman, Olarinde Famous-Cole and the Force PRO, Moshood Jimoh on the official position of the Police on Evans’ whereabouts were neither answered nor responded to as at 10pm yesterday. 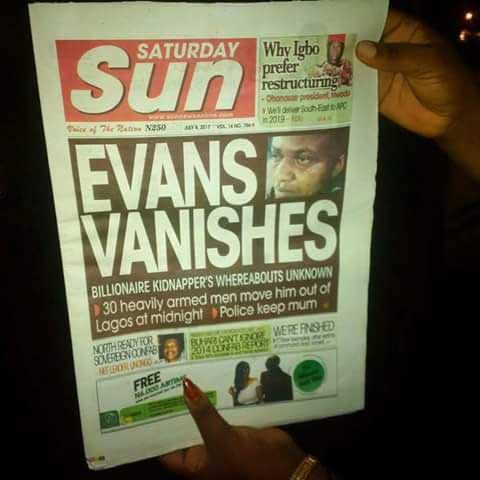