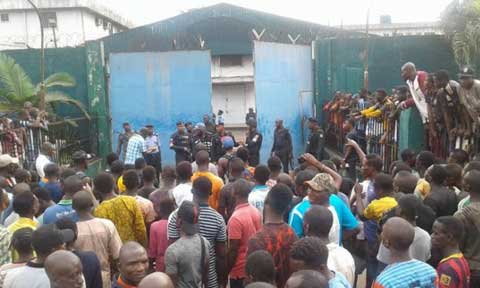 Many tunnels were also seen in the area adjacent to a perimeter fence of the Murtala Muhammed International Airport (MMIA), Ikeja.

Eyewitness said a hawker who fell into the hands of the gang raised the alarm after she managed to escape.

People around the area were said to have invaded the place, where shoes belonging to males and females were found.

A sharp knife was found on one of the suspects said to have been posing as a mad man. 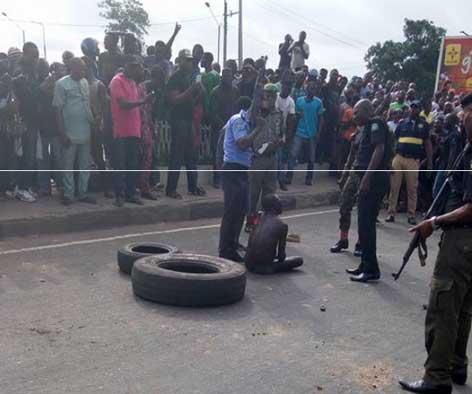 Men of the Rapid Response Squad (RSS) rescued the suspects from being lynched by a mob at the scene.

The suspects were whisked away from the scene in a police van.

The Nation learnt that the suspects are being interrogated at Isokoko Police Station in the Agege.

There are at least eight patrol vans of the police at the location, while a huge crowd converged on the place, making it difficult for free vehicular movement.

Police also foiled an attempt by a mob to burn down a warehouse suspected to be the hideout of the ritualists.

As of press time, the warehouse was being guarded by RRS operatives.

An eyewitness told The Nation that the suspects ‘’were picked up after RRS operatives removed a manhole from an underground canal where the ritualists were hiding.’’

A police source, however said those arrested are destitute who converted the disused drainage channels into shelter. 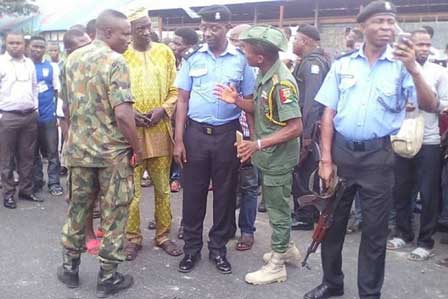 “I was coming home today (yesterday) when I encountered traffic like never before on Agege motor road. I trudged along thinking it was an accident only to get to Ile Zik and find out that den was uncovered right along the road. I pass that place every day without realising demons are lurking around there.”

“There was a man who pretended to be a mad man but we found out that he is not mad but a kidnapper and rapist. The police were afraid to go into the tunnel because there are other culprits in it.”

Police Commissioner Fatai Owoseni said there were no shrine and no human parts in the den.

“Our men personally entered the place and saw some people with tools dressed in mechanic clothes. People living under bridges, tunnels, uncompleted building and trenches should be careful because you stand a chance of being tagged as ritualist and being mobbed.”