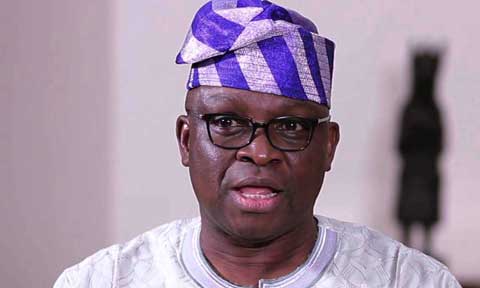 He said his next target after leaving office is to become the president of the country after which he would go into full-time ministry.

Fayose said his “popularity” and “influence” would serve him in achieving his ambitions.

He said this during an interactive session with some reporters in Lagos.

“There is nobody reasonably who doesn’t know who Ayo Fayose is and the decision to me being president is spiritual and physical on the other hand because when your time comes, it will manifest,” he said.

“I am a force God has created at this time. When I retire, I’m going to become a pastor with a very big ministry.

“After being president of Nigeria, I will be a pastor who will be a major force all over the world.”

Speaking on his “ spiritual gift” the governor said he had been getting requests to prophesy about Nigeria’s future.

“Nigerians know that if I give you figures, they find it like that even my prophecies. Some of the things I said about last year came to pass. Some people have been calling me to ask for the prophecies for 2018,” he said

He said he is prepared to be maltreated over his criticisms of President Muhammadu Buhari.

“One pastor said the federal government will bundle Fayose this year, and so? Let them come and do it, who is begging them? I’m equally prepared,” he said.

“I remember Gani Fawehimi, he goes around with his bag. You can arrest him any day, what is the big deal? Some people, their promotion will come as a result of oppression. Our enemies are not our enemies in totality, they are catalysts to our success so I don’t care.

“If the federal government wants to go after me, I am more than available. They know my address, I’m in Magodo now, and tomorrow I’m going to Ekiti. I’m available for them. Those who keep their lives will still lose it.”

On his presidential ambition, the governor said: “Nigerians know that I represent the interest of the common man. If my party picks me as their candidate, I will win this election against President Buhari”.

Fayose also advised the president to quit politics at the end of his first term in office.

He said Buhari would do a great disservice to the nation by contesting the 2019 election.

“We pray for our president that God will grant him wisdom to lead the nation right because as it is now, we are drifting,” he said.