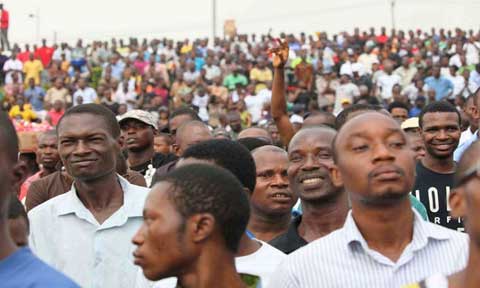 I always say something, entertainment and fun really doesn’t hurt anyone. I advocate for a little bit of fun and bashfulness now and then so please, don’t think that I am a sadist who spends his days on a couch loathing the public and judging everyone. But when education and knowledge takes the back seat for pop culture, then something is indeed wrong.

Over the past 10 years, Nigeria has seen an immerse improvement in connection with the outside world and this has helped us greatly, sadly as it is with the Nigerian mentality, we have forgotten where to draw the line with what we culturally import. Look, about 80% percent of the Nigerian youth are excruciatingly stupid.

Now, there’s stupid in layman terms and then there’s stupidity of heavenly proportions. Now let’s get something right, being stupid has nothing to do with your IQ or brilliance, heck you could be as smart as can be and still be stupid as a rock.

Sometimes, stupidity can be salvaged by the remaining 20% who are ‘woke’ and self aware, sadly Nigeria isn’t that lucky because the smart people of our time cannot be heard, thanks to the immense number of stupid youths available.

How does youthful stupidity affect us as a nation you might ask, well it isn’t far-fetched. France broke the norm for the first time and relegated the populist system of elections by voting an outsider who is also, a youth.

I was personally rooting for Marine Le Pen but I was also glad a youth was given the opportunity to take the reins of a nation.

I was still in glee, until Nigerians decided to spoil my party by lending their voices on the issue. Some lamented that the youths aren’t allowed the opportunity to take charge in Nigeria, others laughed at our old leaders.

Now, you’d think this outcry would be based on sensible facts other than the fact that the youths want a chance to lead the nation, sadly that’s where the protests end.

So I asked myself a simple question, can the Nigerian youth lead a herd of goats, talk less a 55 year old nation?

The ‘Who You Epp’ Syndrome

The answer is no! Impossible! The Nigerian youth is too stupid to lead anybody. Our youths are too busy faking their lives on social media to make any sensible progress. They complain that the elders have destroyed our past but if handed the reins of leadership, will ruin our future.

It’s a fact, most Nigerians can’t even tell you the name of their state Governor or Senate President or I sadly admit, the name of the President and his Vice. When they fail this simple experiment they defend themselves with a sad answer, who them help? This in Nigerian lingo means, how does knowing facts help my situation?

Nigerian youths have no right to complain about the state of the nation when all they do is defend people who go astray and support corruption.

Yes, the biggest sponsors of corruption in Nigeria are the youths. We complain about looters in the government while we go ahead to taint the image of the nation with online forgery and fraud. I do not judge people for whatever reason they resort to crime for, heck, it’s your life isn’t it?

But please, why do the youths rally round caught suspects and blame the system for their woes? We deserve the leaders that we have today because we are no more less than they are. The truth is simple, if Nigerian youths were allowed to rule the nation, we’ll be headed straight for destination fucked! Just this past week, a popular miscreant in Oshodi was killed after altercations arose during a primary election of not even the entire political cache, but one party, the APC! Just one party primary spiralled into hell on earth and just guess whom the perpetrators were?
Youths.

Yes, let’s even pretend that since electoral violence has been the norm for decades, the Oshodi crisis can be forgiven. Let’s pretend it’s normal.

Now, Nigeria is a nation that boasts of culture and we celebrate our annual festivals with pride. So please, can someone explain how a simple festival such as Eyo, ended up with 3 deaths? I mean, for James Bond’s sake, it’s a festival, it’s supposed to be all merriment and dancing, how did 3 youths end up dead? Could it have been that there are rival factions in a trivial matter such as a masquerade? A freaking masquerade???

How on earth can there be separate factions for something as flimsy as a fucking masquerade? How can people even lose their lives over a festival of peace and cultural showcase?
Youths.

Now, let’s even pretend that’s also acceptable, hey, maybe the youths were too high on the cultural spirit and things got out of hands.

Yes, that’s the explanation, extreme culture addiction! I mean, it’s not like youths banded together to form a group called Badoo Boys to wreck havoc on the people of Ikorodu right? Oh wait, that did happen. Okay, we can’t pretend anymore, maybe there is a problem. Maybe our youths are really stupid. But hey, as long as it doesn’t affect me or my family, who him epp?

The Curse of Social Media

I spent a good portion of my life trying to imitate the West. You can notice several literary influences in my writing even and that shows just how much I invested in learning how to think, act and live like a ‘white man’.

My ideas are based on a simple sentence; How would the Westerners do it? I used to adore the West, until I realized that they were just like us, only with full stomachs and a better economy.

Our stupidity ratio is almost the same and this is the culture we want to copy?

Why not copy technology and innovations?

Why not copy their artful style of expression?

Why not copy their style of working together to create conglomerates in entertainment, media and business?

Thanks to the American elections my eyes were opened to the fact that the West is also battling stupidity amongst its youth.
Sure, the youths aren’t killing anybody, oh wait, they are! Chicago says hi! Isn’t it a sad point that we are so engrossed in acting like Black Americans when they make up a large portions of the stupidity ratio in America? We want to think with our feelings rather than common sense.

We want to drive the latest whips and show off like the rappers do over there. We want to showcase our wealth on social media just because they are doing the same thing. We want weird nicknames like Drummers Ear (Rae Sremmurd) and want to mouth off gibberish like Migos et al while showing off the fact that we aren’t missing out in life.

AS IF MONEY MAKES A MAN. AS IF BLING AND PROPERTY MAKES A MAN. We have even integrated the ‘fuk boi’ culture and have normalised cheating and unfaithfulness just because we saw it on social media. We have copied all of this while forgetting that the people we copy make up about 17% of the population in America but commit about 54% of the crime over there. Such role models.

We also forget that a good portion of the members of Ivy League colleges like Harvard are stupid dumb-asses who have no thoughts of theirs when it comes to social issues. We have no idea that the same people we copy have the same problems as we do, they’re just not as hungry as we are.

On a Final Note

I feel bad for the Nigerian youth to be frank. We have socio-economic problems to tackle each day. We are jobless, we are hungry and we are being pushed into thinking that we are missing out on the good things in life. With all these on our shoulders, we still have to keep up appearances on social media. How hectic!

Nigerian youths are stupid, that is a fact. Now how do we fix this? Simple. We need to start calling out the stupidity of our peers first of all. We have to admit that we are not on the right track and we need to rethink our entire existence. We need to stop paying attention to our stupid celebrities who want us to think that money makes the world go round.

We need to understand that it’s not about us anymore. No! We have the opportunity to make Nigeria a great enough nation for our children and their offspring. We need to stop blaming everyone in the government because truth be told, we’re all guilty. They’re guilty of stealing our money and we’re guilty of driving the getaway car.

We deserve to suffer and face economic strife as long as we continue to be stupid. Stop backing criminals. Stop cheering politicians that steal our money. Stop using tribalism to justify their actions and most of all, stop drinking the social media’s stupidity serum.

All this can be classified as a rant because most of our youths would never read to this point of an article but let it be noise nonetheless. I will continue to scream sense into the ears of those who want to hear and to does who want to continue in their stupidity? Who Them Epp?