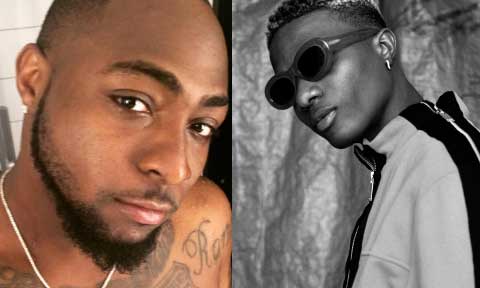 Banky W’s fatherly advice came to the rescue just when the bulgy “beef” had begun to work its way up to the entertainment industry. We saw how the fight between Wizkid and Davido, disjointed the relationship between Tekno and MC Galaxy and MC Galaxy and Cynthia Morgan in its maddening rage.

However, in his post on Instagram, EME boss admonished the beef-happy duo to eschew mudslinging and work together. His message produced instant response from the two superstars; it also quietened the junta conflict bolstering rapidly among other artistes.

Happily, the two sensational pop stars have been dispatching cryptic, but pacific missives at each other.Wizkid in his response thanked his former boss and another sympathiser for their intervention, while Davido sought forgiveness.

Starboy tweeted: “Big thank u to Banky W and Osagie! I can’t put into words to express [sic] how thankful I am! God knows! Love”
Davido also tweeted: “If I offend eeee youuuu …! Love”.

Since then, both singers have been going about their normal businesses and tours: tweeting and posting pictures of local and international exploits and successes. They also performed in Belgium, though at different venues.

Honestly, everybody is happy that there is peace, no “mudslinging” as Banky W advised on social media. It is also believed that the duo of Kcee and Harrysong will take a cue from this peace accord.

Only that the war between Wizkid and Davido may never end.

Kcee and Harrysong may choose to negotiate their way to peace. Don Jazzy and Olamide had a bitter misunderstanding. But Wizkid and Davido’s situation has no explanation, no convincing beginning and therefore no end. For in the world of Wizkid and Davido, “fighting is not a sign of not getting along, but how they get along”.

The Beginning of the End

On 14th December 2014, the first report of the end of the ‘beef’ between Davido and Wizkid was widely circulated on social media and newspapers. It filled many with peace. The superstars were spotted, hand on each other’s sides, at Escape, a night club, smiling and giggling, after having torn each other apart for months.

One of the reporters quipped that he “hoped that one day PDP and APC could hug each other like this”. Wizkid and Davido’s method was his perfect example of peace treaty.

Well, not longer than three months into 2015 trouble visited: the twins were at war again.

And in another mysterious way, they managed to bury their hatchet before the new year. This time, they performed together on the same stage in Lagos, Nigeria. The crowd was literally thrown into hysteria when after Davido performed his Dami Duro single, Wizkid appeared on stage and in fact was held up stage by OBO himself. Reports went out again that there was peace. Fans were jubilant and once more placated. But here we are.

The truth is between 2012 (when Davido became a musical item) and now, the relationship between the two superstars has been somewhat like the Nigerian power supply – off and on.

READ ALSO: Deep Cut On Liz Anjorin's Back By Brother

Davido in a recent interview with media guru, Olisa Adibua quite frankly said, “Since I came out, there has always been this comparison between me and Wizkid, but there’s room for everybody, we are not doing the same thing.”

And in his own response also with Olisa Adibua, Wizkid alleged that “He (Davido) is jealous of my success.”

Interestingly, no younger artiste in Africa is as successful as these two. As of today, Wizkid and Davido occupy a strategically important position in Africa, and perhaps the world, because of their music – and maybe nothing more.

Year in year out, their songs have continued to flaunt Africa, its culture, language and essence, to the world, earning them a very large and global fan base as well as local and international recognition.

Their successes also have chipped them off other industry mates on the continent, setting them apart and in a class of their own, a class that makes it possible for people to see them as being musically identical.

This twin identity that people have forged for them is the genesis of their supremacy battle. What should have become a good reason for collaboration and team work has constructed a huge boxing ring where these artistes are forever locked in, flexing all their muscles in a bid to outwit each other and to who see emerges victorious. They fight and compete, just like everyday twins. It is usually a fight about trifles and stuff, about who gets the best things, the best shows, larger followers ad infinitum. Because it is headless, it never ends – only taking new dimensions as time rolls by.

An expert in Twin Psychology at Twins UK limited once wrote, “A good way to encourage compatible behaviour between twins is by rewarding them for cooperative play.” So, we will continue to praise every attempt at peace and cooperation between Davido and Wizkid.
And it will be best to end with Banky W’s sagacious admonition which was inspired by the words of American millionaire rapper, Jay Z.
And here it goes:

“When you’re running a race, if you stop to throw stones at every dog that barks, you’ll never reach your destination or you’ll get there mush later than you should. And, a mud fight may seem like fun, but in the end, everyone just comes out looking like shit. Food for thought. Nobody wins when the #FamilyFeuds”.