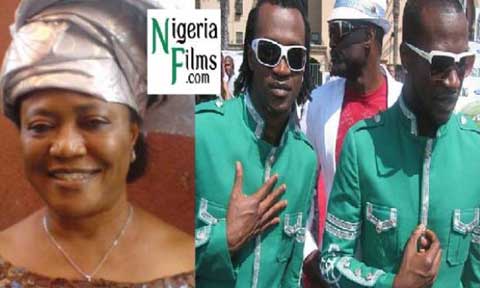 The Okoye brothers getting into fights and making it public on social media, thereby attracting comments from fans and strangers who love to dish out advice for a story they truly know nothing of is no new story.

The last fight which was in 2016 led to the duo itching to restructure the family business . Only after lots of pleas and intervention from fans and colleagues were they able to settle their differences which led to a release of their hit song “Bank Alert”.

But what exactly is the problem? This is a question I can’t give a specific answer to. On September 14th, Peter Okoye took to his Instagram to make a post which he said:

“If it makes you Happy, no one else’s opinion should Matter. ???? #LiveLifeHappy #WordsOfHappiness #KoolestDude? #MrP”

“Back to naija don’t take my silence for granted…. only a woman can come where brothers are working in peace and destroy it #youknowyourself …. try me this time … I swear Nyash go open you will know that blood is thicker and stronger than juju, Since the announcement of the arrival of these two….i swear some people have been restless, they cant even sleep, they are not at peace #jelousy #envy….I swear if na plot of land some pple go don buy 10 plots lol…. all these distractions cant stop God’s blessings…. #doubledouble #somethingisfishing” He said on the 17th of September.”

Festus Keyamo, Psquare’s lawyer has made a public statement saying that none of the P’s are at fault neither do their wives have a hand in it. I understand the lawyer is just trying to do is job by not putting the blame on anyone, but we can’t deceive ourselves, they didn’t just wake up one morning and start to fight, someone is definitely at fault. Paul cannot just post about people being envious of his twin for no reason, without him hearing, seeing or being told something. This is pure logic. No one lays on the same bed with the Ps and their wives, so we have no idea what the wives whisper in the ears of their husbands at night, regardless of how innocent they might act in public. Peter also made a statement that he can’t betray his wife and kids because of a group, which also point to a fact that the wives’ hands are in this issue, whether we like it or not.

But really? How true is this? In life, a woman has the power to bring big problems among brothers and a woman has the power to mend things. At the moment, none of the wives of Peter & Paul Okoye, who are in the exact position to make Psquare live in peace, are making peace happen. I would strongly blame the wives for the fights between the siblings. They are not speaking peace into heart of their husbands, but I must say Paul and Peter need to grow up!

For crying out loud, wtf can cause a big fight between identical twin brothers that have been doing good music together for over a decade. I won’t deny the fact I don’t know what exactly could have caused the problems between them. What I do know is under no circumstances should this ever happen, it’s just pure logic.

Two things that could possibly cause an issue between the twins are “Money” or “Women” and I see no reason why they would fight about money. Peter & Paul live a life any average Nigerian would wish for, a flourishing career, beautiful wives and kids, mansions, wealth, fame etc. As far the music industry is concerned, Psquare is one of the top 3 richest artist in Nigeria. This is a country with a population of over 170 million people, ranking among the top 6 most populated country in the world and you guys are among the richest artists, what on earth do you want again?

I also see no reason why women would bring a fight between you two. Once upon a time, these women were not in your lives, You were both born together and grew up together, no one should understand you both more than each other. I’m calling out the wives of Peter & Paul Okoye, if Psquare gets to finally split, the fire is on your head. More Nigerians would hate you both and I’m sure you both wouldn’t give a shii about what Nigerians feel but remember your children, they would grow up and tell me how you would feel when you see them fight, maybe then you would know how Psquare’s mother would be feeling right now in heaven.

Lola Okoye and Anita Okoye, only you both have the power to settle the differences between your husbands, whether u agree or not. And if you don’t settle this, I hope the wrath of the boys late mother come on you both.

Back to Peter and Paul, I hope you both realize you are not the only dual act in Nigeria, we have Bracket & Skuki that have been in the game for a long time too. They are not twins or even brothers, yet you don’t see them fight and wipe their as**s on social media. They probably fight once in a while but they are matured enough to settle their differences while you, though blood and twin are acting like 6 year olds. If I have little 6year old twin acting like you both are, I would flog their bum bum, you both are becoming a disgrace to the Nigerian music industry and to Nigeria as a whole, fighting on camera. The Psquare I know can sell a record and make hits without pulling stunts and generating controversies. If at the end of this, you both make us believe it’s all a stunt (which I know it isn’t), note that we won’t justify it. You’re still be a fuck up for pulling such expensive shii on fans.

I’ll keep praying for Psquare and I urge Nigerians to keep praying too. My name is Stephen, you can call me Ofishea. #JustAConcernedFan #JustSpeakingMyMind #ThisIsMyOpinion