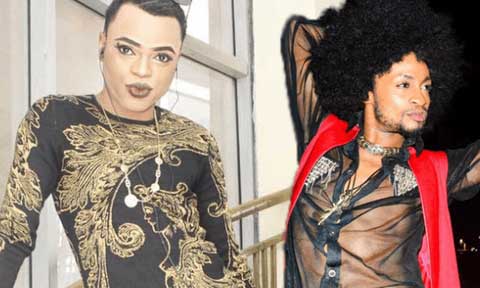 Though he had once asked Nigerians to desist from comparing him with Bobrisky, people still think they share a lot of similarities .

Chatting with Sunday Scoop, Denrele Edun said he has only met Bobrisky once and it was before he became famous on social media .
He stated , “I don ’t even know the guy personally .

We ’ve never done anything together and we don ’t have anything in common . I read about him and see things he shares on social media .

“I only met him once when I visited Toyin Lawani ( a celebrity fashion designer ); you know Toyin is my friend .

When I met him , he was not as popular as he is now and we had a friendly conversation. Then, he was always with Toyin .

I am even surprised they are having issues with each other now because they used to be very close. ”

According to him , he doesn ’t have any problem with Bobrisky as people can become famous by different means .

“ People should let him be . He is having fun and he enjoys every bit of it .

I don’t have any problem with what he is doing .

He understands the power of the social media and he is using it to his advantage .

People who think I gave birth to Bobrisky say so because they don ’t know my story .

I worked to get to where I am today .

“ Even when he was saying things about me on social media after I asked people not to compare me with him , I deliberately didn ’t reply him because I knew he just wanted attention .

At some point , you may need all the attention but one will get tired in the long run.

He is enjoying the attention presently , ” he explained.

Also , Edun insisted that marriage was still top on his mind, but he needed to make sure things were in place before starting a family .

I need to make sure my family members and everyone around me are okay before taking a wife .

I will definitely marry ; it will happen at the right time .