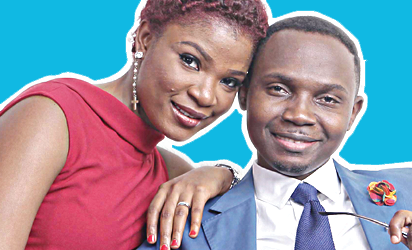 Teju Oyelakin, a comedian and famous TV talkshow Presenter of the popular comic show “ Teju Babyface” has said that he has so much respect for the scriptural verse that says, “marriage is honorable in all and the bed undefiled…’

Teju who has been four years in marriage revealed contrary to public view that he never had any carnal knowledge of his wife until he was formally married and wedded.

He said that because his father understood what it means the honour the marriage bed and he has always advised him to stay away from sleeping with any woman he wants to marry.

According to him,” Lord knows I didn’t always live and behave like that, but, somehow, I was fortunate to discover not only the truth but also the strength in keeping the marriage bed undefiled before I got married to my wife.

“My father was also very insistent that I should not sleep with the woman I would marry. He would say ‘look, one can even make a mistake and slip up but don’t make it a lifestyle!’ Plus my wife was having none of it! For where?