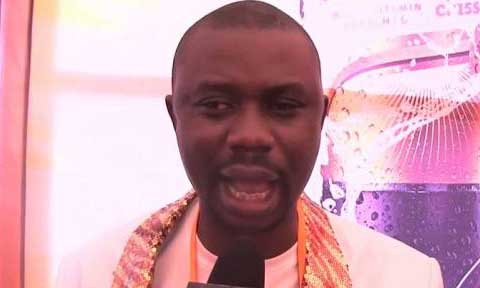 Kelly Egbere, a visually-impaired comedian, popularly known as Kelly Blind, has appealed to the Lagos State Government to look into the injustice allegedly meted on him and members of his community by EIB Trustees of Skye Bank.

Kelly Blind, who paid a visit to the studios of SaharaReporters, on Monday, to express his grievances, said he built the three bedroom house in Awoyaya, Abule Parapo, Ibeju-Lekki area of Lagos State, single-handedly, despite the challenges he faced as a result of his impairment.

Narrating his ordeal, he said: “I bought a land in early 2016 from ‘omo onile’. It was a plot of land and I started developing it. I completed the building around January 2018, so I moved into the property on February 4, 2018. I started staying there with my family.

"It was not until June this year that about 100 policemen came to the community. They posted something on our building. When I came out and I approached them, they said they were from EIB trustees, which is said to be affiliated to Skye Bank.

“They said the land we bought belongs to them, but the truth is that they don’t want to demolish any building there. They asked us to come and regularise with them and pay ratification.

"They said we should come through their lawyer, whose address and phone number they gave us. We called the lawyer and he said we should come to his office,which was located somewhere around Agungi Osapa London, Lekki Epe expressway. I personally went there to discuss with them since my property was involved.”

According to him, after the visit, he given the assurance that no property would not be demolished.

He said his registered estate, Glorious Villa, where his house is located, engaged a lawyer Barrister John Oloyede, who discussed with the lawyers of EIB trustees, on behalf of the community.

According to him, on July 3, 2018 the community received a letter that did not show anything about demolition, and he was surprised when on July 21, some group of people, accompanied by some policemen came into the estate to post a 72-hour removal order.

He said: “When I went back to the house, they read the notice to me. I was told there was no attached court order, no signature, nothing. That day was Saturday, so there was nowhere to run to.

"On Monday, we went to the office of the Lagos Commissioner of Police. When we got to the office, they even mocked us for our anxiety and told us to ignore the notice. However, we did not stop there. We went to the governor’s office, where we submitted a letter. We did not get a response to that letter.

“On July 23, we were at the office of the governor and the office the police commissioner. On July 24, more than 500 policemen, Lagos State task force officials, with about 15 Black Maria, and more than 80 prisoners, came to the area and held the community to ransom. They demolished some of the fences.

"After that, they left and we thought that was all. However, on July 25, the governor was having a town hall meeting at Ibeju Lekki, which was on Wednesday, and some residents and landlords living in that estate went for the town hall meeting. Before they came back, their houses were demolished.

“As I speak to you, I have a ten month old daughter that cried for four hours that day because they demolished everything inside my house. There was no way for my baby to get food. I even called a friend from outside to bring food and drugs for my baby and the person was stopped at the estate gate. They held everybody to ransom and said nobody was allowed to go out or come in.

"More than 800 houses in the community were demolished. As I speak, from July 25 till date, we have been faced with unbearable living conditions. As a blind man in this country, I have tried my best as all my life saving were used to build the house. I even built the house in a way that would cater to my disability.”

After the demolition, according to Kelly Blind, members of the community were addressed by the Special Adviser on Civic Engagement to the Governor, Benjamin Olabinjo, who told them that since none of them was up to the age of 50, he would advise them to start all over again.

He expressed disappointment at the statement of Olabinjo and called on the Supreme council to investigate people like Barrister John Oloyede, the Skye Bank lawyer, who assured the residents that the buildings would not be demolished. He also mentioned Barrister Billy Abdul, Bala James, among others as being involved in the matter.

Efforts of SaharaReporters to reach Utah, Bala, James and Partners, the solicitors of EIB Trustees, were unsuccessful at the time of filing this report.