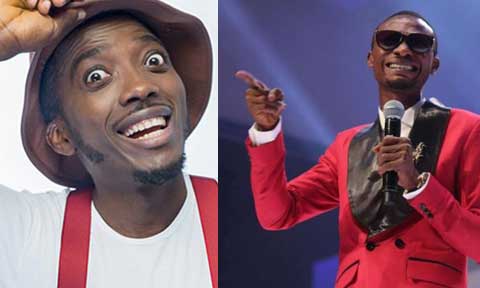 I Go Dye who shared a photo of Bovi with former Governor Emmanuel Uduaghan, had written;

I GAVE YOU AN OPEN CHALLENGE TO SPEAK FOR DELTAN’S BUT YOU MISQUOTED WINSTON CHURCHILL. BUT FAILED TO USE YOUR OWN QUOTES, AS YOU HAVE ASCRIBED INTELLIGENCE TO YOUR PERSONALITY. This is not an argument or fragmentation of your imagination that is contested, it is the truth against our people that they are using you to divert. I will not reply to you again.

How much have you been paid to sell your hard YOUR hard earned reputation, as a beautiful Nigeria youth, that grew to become AKPO’S, now Bovi, only to be commissioned as a Baby lawyer by your favorite Governor Uduaghan?

Someone whose children are graduating today in London, while Delta State University is still in decay. what made you accept a baby lawyer’s appointment, just to support those that have caused pains to millions of Nigerians? who sleep every day without a meal. It is not about me, but for the sake of our future.

As you are reading this,I want you to realise that someone’s son or daughter is in about engaging in something that is disspeakable, to him or her because of survival,either to be in school , to support their parents who are now old,sick,pensioned denied and living in a rented apartment, while those you are defending are living in glass houses,their children are flying private jets across the world, with no better qualification than those unemployed.

This is what I was against before they tried using you to divert the truth. Why would you choose to become the scapegoat used to cover the mess in exchange for a salty porridge? So that dem go say Bovi and igodye dey beef.

This is between me and Dr. Uduaghan please take yourself out. You have your right to support him to be a Senator because you have a very close relationship with him, I understand, because na your house he dey so. Tell him the honest truth, that Amb Igodye said he should give room to other young Deltan’s to go for the Senatorial post and not him. 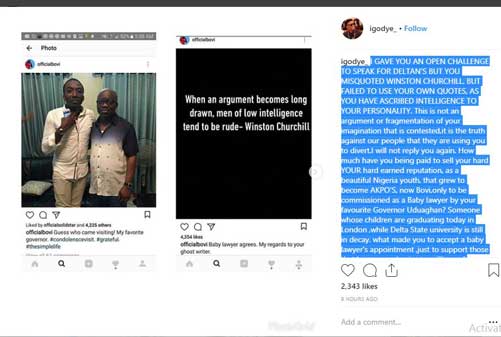 He has been inactive governance for 16years and he did nothing for our people. What more can he offer? How much or how many show dem wan give you?
I will be one man squad with grace. I will rather stand and die but speak the truth than to sell my conscience for money. Reacting to the new post from I Go Dye, Bovi wrote;

You just messed with the memory of my late mother. That was in March 2016. RMD brought him to my house to commiserate with me because he wasn’t going to make it to the funeral.

This was days to her funeral. If only you could comprehend averagely, you would have known that my initial question to you had nothing to do with governance! Unlike you, I do not dabble in politics. It’s not my turf. My take on politics comes up mostly on stage.

I’m friends with many governors and politicians simply because they love my work. The present Governor of Delta state was at my mothers funeral as our family’s guest. Unlike you, I have not gone to burden him with self-serving proposals. Please note that I didn’t bother his predecessor too.

That’s always been your game. I was simply calling you out the way you called the governor out. Now, look how you’re rattled and running all over the place! Francis, your legacy in the comedy industry cannot be questioned but your shallow intellect has never been up for debate.

If you thought your actions through, you will know that after your multiple visits to the ex-governor, cap in hand, including the one you showcased only a portion of the video on the 30th of April this year, you have no moral standing to speak scathingly and publicly.

When your enlightened writer put up the post on the former vice-president, you called and asked my opinion and I gave you thumbs up. You know why? Because I know you had never taken one of your self-serving proposals to the former VP.

I have nothing against your hustle. If you want to segue into a social critic, it’s fine. But If any of our friends called you out after dining with you for years, I’d do exactly the same thing to that friend as I have done to you. For you to scroll down my IG page to two years ago shows your desperation to drag me in your mud. Don’t do that again.

Go and sin no more. You will be okay.

PS- if you ever mention my children again, I will physically beat you up 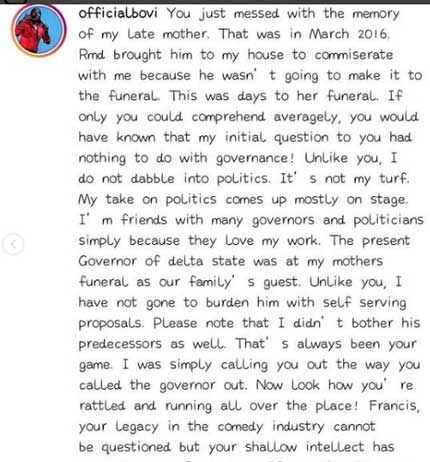