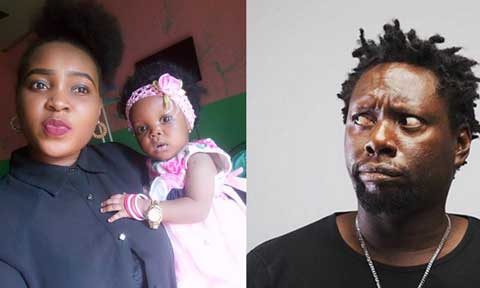 According to the report, the Marriage broke down due to Irreconcilable differences and Lilien moved out of their matrimonial home in May, 2018, with their three kids.

Her move came, barely a month after a lady, claiming to be the comedian’s secret babymama, outed him in April, 2018, and told him to take responsibilities for their baby.

Afamefuna Klint Igwemba, popularly known as ‘Klint da Drunk’, is born of Ibo parents. He is from a family of 3 and he hails from Agukwu-Nri in Anocha LGA, Anambra State.

He graduated with a B.A in Fine and Applied Arts at the Institute of Management and technology (IMT), Enugu. Nigeria.

From his secondary school days, it was known by his classmates and all that cared to know him, as a very funny person who liked seeing smiles on people’s faces. Thus, he started a life of showbiz from an early age. While at IMT Enugu, his reputation as a singer was widely accepted by the school until 2Face came in as a student and sang in a show. As Klint would say, “I had to change my career”. He then decided to utilize his talent as a comedian.

To keep his dream alive, after his Schooling days, he engaged himself with programs on NTA Enugu and the then ETV Enugu so as not to lose touch. He presented programs, acted in mini-series and was generally involved in acts that drew him closer to his passion. He has worked with veterans like Peter Igho, where he gained so much insight in the art of showbiz.

He was discovered as an act by Opa Williams in Night of a Thousand Laughs, through the help of Yibo Koko, in Port Harcourt, and has since become a household name of the comedy industry in Nigeria. Other successful ventures were his involvement in various Nigerian Movies like The Destroyers, Chain Reaction, Lost Kingdom, My House Help, Men on the Run and so many others. Klint da Drunk was also musically successful as he was featured in Nigga Raws song – ‘Obodo’ where he sang the hook that sold the song.

Klint’s work experience is as eclectic as her background, he teamed up with Dat Nigga Raw and they were the duo who won the musical title in the Benson and Hedges grab da mic competition, preceding Psquare. They also were the first runner up in the maiden edition of Star Quest held by the Nigerian Breweries. He has since been involved in so many ground breaking shows in Nigeria, Sierra Leone, Liberia, Kenya, South Africa, Ghana, Togo and internationally; Europe, Asia, UK and so on. His first show titled ‘Comedy in Xcess’ was held in Abuja and had the likes of the Former First Lady, Late Chief Stella Obasanjo in the company of other dignitaries like Daisy Danjuma. He is the favorite of the former President of the Federal Republic of Nigeria His Excellency, Dr Goodluck Johnathan.