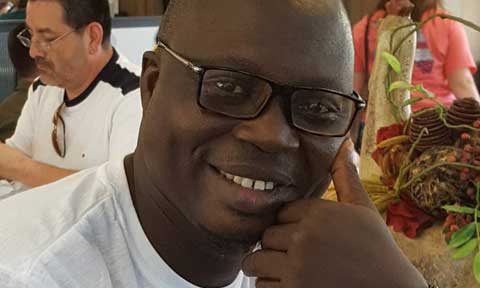 Mr Latin recently spoke of two trends that have become an issue in Nollywood particularly the Yoruba speaking segment.

First the actor gave his thoughts on skin bleaching that has become rampant among actors and actresses “Well, I think it’s a matter of personal conviction. It’s not peculiar to the female artists alone; some male artists are also guilty of this act. We can also attribute it to bad company. Some believe that with a flashy colour, they’ll get easily noticed, so they just go for it.

Some other believes that producers will notice them easily if they are fair in complexion, so they step up by toning. Also, some believe that since my friend is light skinned, I have to be light skinned too. But the truth is that, nobody, no producer will make it compulsory for you to be fair or light skinned before you can get a role.

Let’s even take for example, if Antar Laniyan is playing the role of a father, it would be difficult to use a fair skinned lady as his daughter, same as if Ogun Majek, or Ogogo is acting as a father in a movie too, it would look absurd to cast a very fair skinned girl as the daughter. Therefore, being dark or light skinned have their different advantages and disadvantages”.

“That is one area that is giving us serious headache in the industry and we are trying our possible best to correct the menace. Recently, the TAMPAN executives under the leadership of Dele Odule had a meeting with all the movie marketers, led by Corporate Pictures on how to improve on this. Rotor, I have to admit that both movie producers and marketers are the root cause of this. Let me give you an illustration, when I produce a movie, I do the editing and give it to the marketer.

Most of these marketers have people that subtitle movies for them and, more often than not, the persons subtitling may not be a professional and may also have so many jobs at hand; thus, they have to rush up just in time for the release of the movie. Therefore, no time to proof read by the producer or even the marketer all because the work was rushed up to meet up with the deadline for release.

The marketer is focused on selling the finished work and make profit on his investment, the producer also want his/her financial gains back on time while the person doing the subtitling have several other jobs waiting for his/her attention.

So the cycle continues. We have recently come to the realization that this act is affecting the business negatively. So we have therefore decided to tackle the menace by handling it professionally. People easily get discouraged because of the poor subtitling and this has turned us into laughing stocks in the society. You read some subtitling and you’ll nearly faint. We are not proud of this and are doing everything humanly possible to tame it.

With the different guilds in place, we can control and tame the activities of everybody involved in a movie production, unlike now that it is free for all. For now, anybody with capital can just come in and produce a movie, but very soon, that would become impossible. In a short while, the new plans would be put in place, then, you’ll definitely see a lot of improvements in the way things are being run in the industry.”