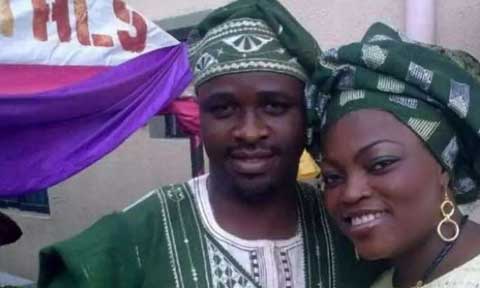 After several reports made the rounds that the actor has been involved in secret affairs with the leading actress who featured prominently in the Yoruba movie Jenifa (a village prostitute who got admission to the University in the City) 1 and 2, Funke Akindele. Femi Adebayo is the son to the ace actor Adebayo Salami (Oga-Bello) who was formerly the Association of Nigeria Theatre Arts Practitioners (ANTP) national President.

Before things finally degenerated to this level, there have been several reports making rounds about how Femi sent Khadijat packing with three children after several efforts by and concerned friends and relatives to reconcile the embattled couple failed. Khadijat now presently live with her parents at Ikpe road, GRA Area, Offa, and Kwara State.

The University of Ilorin Graduate of Computer Science SE gathered has been abandoned and left to cater for three kids.

The embattled woman also has to face the reality of getting a job for the upkeep of the children, unlike when she lived happily with her husband as a full house wife, to take proper care of the kids.

A source further hinted SE that several efforts made by Khadijat to be reconciled with her husband yielded no result. There were situations she sent text messages to Femi about the crises in their marriage and the need to make up as a couple.

Such text messages a source informed are forwarded by Femi to the mobile number of his father, Chief Adebayo Salami, which one way or the other always get to other members of the Adebayo’s family, Khadijat’s family, we discovered, has not been happy with Femi’s father and mother the way they have handled the crises between the couple.

They believe Oga Bello as an authority in the Nigeria movie industry should have called both his son Femi and Funke to order, rather than watch them, a situation that has adversely affected the marriage which has resulted in constant feature in the media, leading to an eventual crash. This ugly trend has caused more damage than truth. On his part Oga Bello has denied any knowledge of the relationship between his son and Funke. He said he’s not aware that his son, Femi is having an affair with Funke Akindele.

Before this whole issue finally degenerated to its present state, Oga Bello earlier spoke, saying that only Femi and Funke can clear the air on their relationship. He said: Everybody is entitled to his own opinion. Only Femi and Funke can talk better on that. I am their father in the industry.’’ Another Nollywood source said, these days, Funke has become the toast in Adebayo’s household.

The source disclosed: ‘‘Funke has played herself to be a very important personality to all members of Femi Adebayo’s family. They are involved in the production of her movies. Apart from that, she visits them at their Ikorodu, Lagos home regularly.

’’ It was further gathered that Khadijat recently drank a toxic substance believed to be poison as a result of frustrations when the heat became seemingly unbearable for her sometime in September 2009. She was then taken to an undisclosed hospital. The crack in the matrimony became more obvious when Femi was spotted lodging at a popular hotel in Ibadan, with reports getting to his wife that her husband was sighted at some fun spots with his new love Funke Akindele.

Femi and Khadijat started well while dating; they were University of Ilorin students. Then, Femi was studying Law, while the soft spoken devoted Muslim studied Computer Science. It was gathered that the fact that Femi was Khadijat’s first love has made it a difficult task for her to live without him. When the going was good, Femi apart from being an actor and a caring father also had a thriving Law office where he handled a few legal matters on properties and importation, while Khadijat kept the home front going, taking care of the kids.

Meanwhile, the relationship between Femi and Funke has continued to raise a lot of reactions amongst actors and actresses who are privy to how the two love birds relate on movie locations, and there have also been several situations when Funke had challenged some actresses who are close to Femi and who she often threaten to deal with. However, with disturbing stories like this, one would simply say most Nigerian actors and actresses lack character and dignity and they stand in contrary to what their profession stands for (correction of societal ills).

Incessant stories of spousal abuse, divorce, recklessness etc are often emanating from their end. It would be recalled that the circumstances surrounding the death of Monsurat Omidina (Omoladun Kenkelewu) was also entangled with strands of protracted arguments and beating by Tunde Omidina (Babasuwe) her husband which arguably led to the death of Moladun. Also Lilian Bach was enmeshed in a husband snatching scandal recently.

In another development Ronke Ojo (a.k.a. Oshodi-Oke) who got married to Sylvester Omogbolahan Anthony (an auto dealer) on January 24, 2009, also witnessed a crumbled marriage in October 2009, with the husband giving reason for the separation on grounds of infidelity; this is one too many.