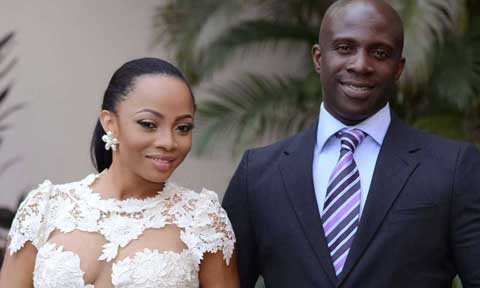 There are some men who show their personality but their partner is too involved and chooses not see these traits of irresponsibility.

Maje has broken three women, married one and made two baby mamas. A man who toils with a woman’s emotions can be seen what?

A man who sues his ex-wife Toke Makinwa for 100 million naira, a woman he once loved so much and took vows with on the alter, what should we call that man?

When photos of his Trinidad baby mama Crystal and her 6 years old surfaced, tongues went wagging as trolls even went after her.

Sharing her story, the model and TV personality, crystal cunningham has disclosed that Maje has being passive in the life of his son and has never ever seen the boy physically.

What responsible father does that? She claims that she has been responsible for her child financial until recently when he started reaching out for media publicity after photos of her and son, Ajani went viral.

In her words: “he chooses to abandon a lot of his responsibilities. Instead, I chose to do what any responsible parent would do and continued to focus on my career. I transitioned from modeling internationally into full time radio and television. They only communicate via Skype (video call).

Although he occasionally reached out over the past 6 years and occasionally supported financially, he has been reaching out more often in recent times.

Maje contacted us on Saturday for Ajani's birthday right after i made a post about it on Instagram. He is only now reaching out more because of the media attention. I am a single parent. It's never been a secret...at least not from where I stand. I proudly take care of my little boy. He gives me so much strength and motivation to achieve and accomplish so much.

With respect to Maje, maybe you should ask him, what the nature of his relationship with his son is. For me it's very sad and disappointing that people will take liberty in commenting about me and casting judgment without even knowing my story. I work so hard, long hours, weekends even, to make sure that my son has the best of everything, particularly education. And it has been like that for the past 6 years. “