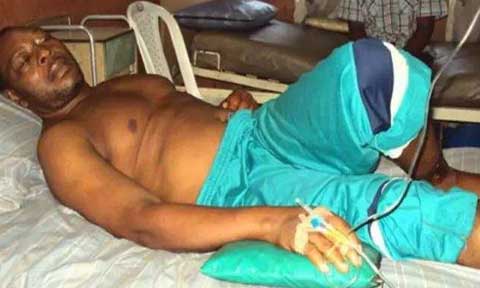 The tough-talking actor is in a critical condition, following the ravages of a strange illness that has not only kept the actor off the screen for sometimes now, but has also impoverished him.

A concerned colleague sums up the situation thus; “This a test case for Ejike Asiegbu, erstwhile president, Actors Guild of Nigeria, AGN,who was recently appointed a personal adviser to Governor Theodor Orji of Abia State on entertainment matters. James is a true son of Abia and over the years, he has distinguished himself as a true ambassador of the State. His Excellency needs to read about this”.

The ailing actor, who was in coma for three days lamented his plight to HVP, saying “ I have spent all my life savings battling this ailment and only God knows how much I have suffered”. When HVP visited him at PAX Medical Clinic located at Surulere, Lagos, last Tuesday, he looked worried and abandoned. However, there were strong indications that he may be discharged by the hospital authority so that he can seek alternative solution.

The actor, who now wears a badge on his left leg said, his condition is compounded by hypertension which according to him, has now affected his sight. He also suffers from lose of memory. “

I no longer see clearly and I find it difficult recognising people or remembering anything. I have been on admission here for more than three weeks” he disclosed, adding “the doctor said, he may discharge me any moment from now.

I want to go home to take care of myself.” On the nature of his illness, the actor explained that “there’s a specific term he (doctor) used to describe my ailment. I can’t remember it now, but all I know is that my Blood Pressure (BP)is very high. And with the injury on my left leg, it has been tough living with the pain. I need urgent support from well-meaning Nigerians to survive this ailment.

I have taken about five pints of blood to no avail. When I was brought to this hospital by Emeka Ojukwu three weeks ago, I was in a coma. On arrival, I was immediately rushed into the intensive care unit, where I was revived. And by His special Grace, I’m alive today”. Prince Uche said “If my people have decided to abandon me here, perhaps that’s how they want to pay me back for all I have done for the industry. Segun Arinze promised to be here today(Tuesday). I’m still waiting for him.”

“When I was the Vice-president of the Association of Nigerian Authors(AGN), I spear-headed the creation of state chapters like Abia, Imo, Enugu, Rivers, Akwa-Ibom and Niger State. And this is one claim no one dare fault.” Lamenting further, the bulky actor who is now a shadow of his old self said,

“I single-handedly revived the Association of Movie producers(AMP) and registered the Movie Marketers Association based in Onitsha. And up till now, neither AMP nor MMA members have visited or called on me. Why should they abandon me now when I need them most?”

“If my people are not ready to come to my assistance, I’m using this medium to call on my State Governor, Theodor Orji to come to my aid. I can’t afford to pay my bills anymore. I need to recover from this illness. My children are still young to lose their dad. My first son is thirteen, while my second is eleven and the last child is nine years old. My wife cannot carry this burden alone.

I ‘m calling on well-meaning Nigerians to hear my cry and assist me.” Tracing the genesis of the illness, Prince Uche disclosed that it all started after he collided with a BRT bus in the Anthony Village area of Lagos. Looking pale and frail on his hospital bed, the father of three children, recalled All I can remember was colliding with the bus. The next thing I noticed was that my leg began to swell. And since the incident happened, I have visited several Churches and hospitals to no avail”.

Today what Prince Uche thought was a minor injury has surpassed his wildest dream. With no solution in sight only the aid of well meaning Nigerians can make the difference in the life of the veteran actor. A good friend of actor Pete Edochie, Prince Uche has featured in movies like “Fair Game”, “Stubborn Billionaires”, “Big Boys Club”, “Dangerous Mind’, “Dons In Abuja”, ‘Town In Danger’ and “Rituals” to mention a few.