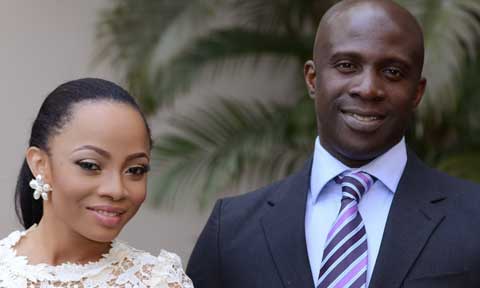 It would be recalled sometimes ago, it was widely reported that the Rhythm FM presenter’s husband impregnated his former girlfriend, who is now abroad to be delivered of her baby.

But not too long ago, someone who claimed to be in the know of what transpired between Toke and Maje even before they got married, posted a comment on Toke’s Vlog.

The informant made the post under an anonymous identity.

“Toke can lie for Africa. Before I write my own, let me say Maje Ayida is a woman wrapper from time. Whether Toke stays at home or is a career woman, he was going to cheat no matter what. But Toke, was Anita a stalker? Was Erica a stalker?

“Were you not the side chick when he was formally dating those ladies?

Who chased them away from Maje so there would be space for you?

Was it not you and your Bacchus friends?

“Harassing them in clubs, spilling drinks on them, all sorts of childish things to let them know you were in side chick then?

Na lie? “Maje was dating Anita, you (Toke) was seeing him on the side in those days of Bacchus, same with Erica Coswoth. Did you really think after you managed to chase them that you will have peace in that marriage?

“He cheated on them with you. So, of course, he will cheat on you too.

READ ALSO: Photos: At 27, Wizkid Birthday Gift Will Shock You!

“Karma is a b*tch. Anyway, as for Maje, yes, we all know you didn’t really want to marry Toke. I mean, even up a few days to your wedding, you were asking your friends if you should marry her (smh)!

But nobody forced you to go to the registration office without your family’s consent. So as you make your bed you must lie on it and make it work out with Toke.

“Anita, I wish you safe delivery because your baby is innocent in all of this. I know Toke made your life a living hell while you and Maje were dating.

“Maje, go and settle with your wife. Make it up with her. Toke, it is well after all you got what you wanted nah – Mrs. Ayida.

“But sarcasm aside, keep your head up. This will soon be stake gist.

But you Toke Makinwa knew, he will always love Anita. So, if you are wise cut your lenses now."