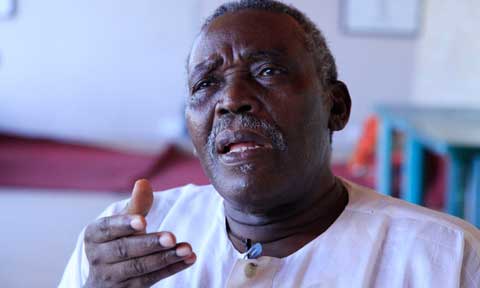 But checks revealed that Jacobs at his early age had to disobey his father and travel to the united Kingdom were he got trained at the prestigious Royal Academy of the Arts in London. Before getting to London he had to cross his only huddle to his dream, he told Punch

READ ALSO: You Are Thieves - Nkiru Sylvanus Tells Past and Present leaders

“My Dad did not want me to go to England. I was his favourite child. When I said that I wanted to act, he said I should do something else and not anything that would take me away from him.”

This may sound funny to a lot of Nigerians today, especially in these tough times that parents would do anything possible to send their children abroad in search of the proverbial Golden Fleece.

But such was the bond between the actor and his father that the latter became scared of allowing him to settle in a foreign land.

However, the younger man was determined to have his way. So he conspired with his older brother who was already living in London and eventually arrived in that country in 1966. Even then, he had to do something to pacify his father and get back in his good books. “When I got to London, I had to send him a message.

As the closest person to him in the family, I knew the right thing that would calm him was tobacco. My father loved tobacco. He was a piper. So I bought him a new pipe and some tobacco and sent them to him through somebody who was travelling home. And he forgave me for disobeying him,” he said.

With his father’s forgiveness secured, and his career thriving young Jacob still faced hash situations that made him regret why he disobeyed his father to travel to the United Kingdom.

READ ALSO: I Wish I Was Deaf and Dump – Adeniyi Johnson

“I was a victim of racism all the time. You felt it in the way the people looked at you and in their attitude toward you. But you could not do anything about it. I could not take somebody to court for that,” the actor said.

Recalling an incident that occurred in the first year of his stay in London, he added, “A white woman once called me a dog. She had a vacant room for rent. But when I approached her, she asked if I didn’t see the ‘No dogs’ sign on her door. Before I could respond, she said that a dog was better than me and then slammed the door in my face. I felt so bad that I almost decided to return to Nigeria.”