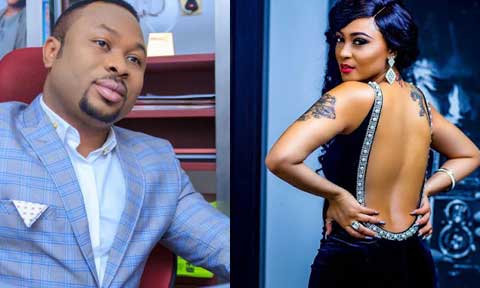 The business man and philanthropist has now made the trending subject matter of his marriage confusing after he debunked ever having a female P.A.

He says his P.A is a male, called Mr Paul and has been working with him for a long period of time.

Talking about Rosaline Meure, he disclosed that it’s only a sponsored blackmail.

He also disclosed in a recent interview with Toast Magazine which happens to be his first interview since the scandal that all efforts to reach the mother of his child, Tonto Dikeh has been abortive.

Talking about the domestic violence scandal he said: “I wonder where they got such gist from? I don't believe my wife will say that, besides I frown against such even my foundation preach against domestic violence in some of our charity awareness campaigns. It is obvious that all these channeled attacks are targeted to drag my image and what I believe in to the mud. Well, the truth is that I have never raised my hands against my wife. I have evidence of CCTV Cameras in my mum's house when this happened. It can be replayed if you what us to go that far.”

He also took his time to address the gay scandal of him sleeping with Bobrisky and Swanky Jerry which he vehemently debunked.

“Truly, I did not see it posted because am not a social media person, but got wind of it later. It's sincerely beats my imagination to think of such relationship...well, don't know Bobrisky but got to know Swanky Jerry through my wife. I believe whoever my wife likes as a friend; I also take as a family friend. Am too busy to think of such unpleasant issues, let alone cooking up defense.” He said.