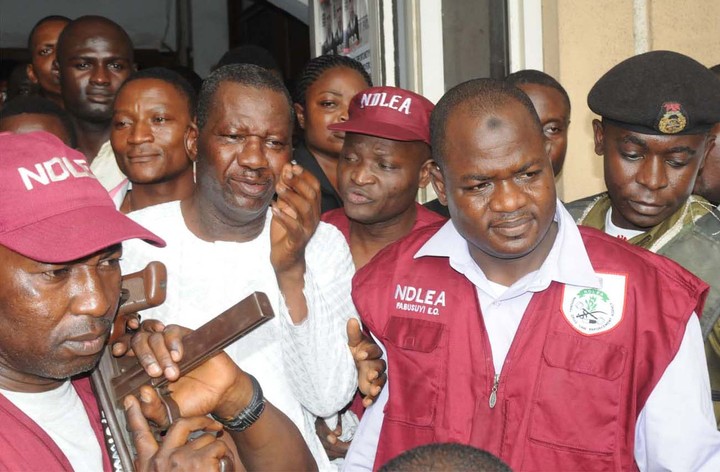 It would be recalled that some years back, Baba Suwe, was accused by the Nigerian Drug Law Enforcement Agency (NDLEA) of carrying drugs which led to his detention and on investigations, nothing was found on him.

The actor claimed that the agency wrongfully detained him for many days and inserted a long pipe through his anus which has now affected him health wise.
Actor, Yomi Fabiyi, who has been close to the actor, is calling on his colleagues to come to the actor’s aide as he can no longer move to movie locations due to the ill treatment he got from the agency.
Read below;

ON BABA SUWE: I am calling on all SENIOR COLLEAGUES in the entertainment world especially those close to Baba Suwe because I don't have everyone's contact to please reach out to him as soon as possible. The torture done on him by NDLEA is vastly damaging his health at an alarming rate.
He told me he no longer feel comfortable since that episode. Baba Suwe is a widower, he can hardly walk properly as I speak, let alone go to film. How will he feed and take care of the children aunty Moladun left behind?

This is an A-List Entertainer and this conspiracy of silence gives me MENTAL AGONY on my part, I don't want to speak when it may be too late, I won't forgive myself. He told me when I visited him that he is innocent of the accusations and yet a LONG PIPE was inserted through his anus; he was detained for too long amongst other things just because he was randomly suspected like every normal person. In my opinion, only lazy, ill-trained, unfit and uncivilized officers torture in the name of investigation. Torture is criminal and sinful. If this accusation is found to be true by independent investigators, it shouldn't go unpunished.

The court asked NDLEA to pay him 25million for damages which is yet to be obeyed but to me an OPEN APOLOGY will placate him and illustrate some dignified and civil approach from a government agency that made him go through all that without coming up with a single proof after that prolonged detention and drama. He who assert MUST prove! NDLEA needs to restore public confidence by doing the needful on this matter. And until individuals and government agency begin to respect fundamental HUMAN RIGHT and enhance duty of care, the essence of Nigeria's FREEDOM is far from been realistic. No malice is intended against NDLEA with this outcry, I just hope the leadership see this as a clarion call for getting it right and save the agency from sending an innocent person to an early grave whereby leaving his children to suffer unjustly. My humble take. Thank you. Yomi Fabiyi