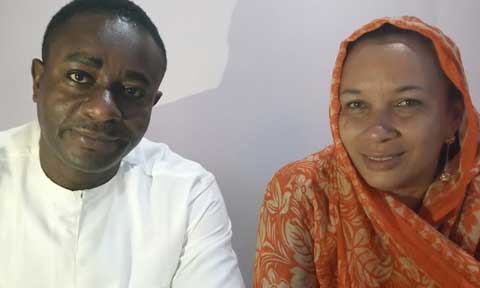 Speaking on way they chose the part of Peace Emeka Ike said “The division was not about her, Ibinabo but about the BOT of the Guild whose tenure has longed expired and has refused to allow fresh ideas and innovations and I said NO, because Nollywood is a global phenomenon and the idea of life BOT will not just work.

As you know this agitation has cost me a lot but today because of the youths I have embraced peace so we can build the future generation together. This RECONCILIATION is for the young Actors in Nollywood.

Fiberesima who was over joyed by the peace process praised Emeka for embracing peace even as she said the next line of action is to see all court cases withdrawn so that the guild will move forward “Today is one of the happiest days of my life because we can now say PEACE AT LAST in AGN.

Our members should be allowed to choose their leaders in a peaceful manner and notb by tricks and ambushing. This division has not helped us in any way. I thank Emeka Ike who has mas made this day possible.

READ ALSO: Why I Changed My Name From Toyin Aimakhu To Toyin Abraham

Asked to speak on a purported reconciliation conference that took place in Enugu state and produced a government of National Unity Emeka said “Whathappened in Enugu was a group of desperate individuals who tried to ambush the peace process.

The same BOT who thinks they can run the biggest Guild in Nollywood like a motor park Association. The question you should ask them is; was Ibinabo in Enugu? If she was not there how many of her state chairmen were there and how many of my state Chairmen were there? Who was the AGNEC chairman? How much was the presidential form? Can we see the ballot papers? Can you shave a man’s hair in his absence? How can you say Government of National Unity when Ibinabo is still in Appeal Court? Do they know the legal implications of what they are saying?

Contempt of court is still a very serious offence the last time I checked. The media and the general public should disregard such sinister misinformation because what happened in Enugu is not only acts of notoriety and perfidy but a futile and crude power grab and we completely dissociate ourselves from it.

This Media chat today with you entertainment editors with Emeka Ike and Ibinabo present to address you is the real deal, the real peace our Industry has longed for. Today Emeka Ike and Ibinabo Fiberesima have reconciled their differences and have teamed up to restore order, peace and progress.” Emeka Ike posited.© Nigeriafilms.com