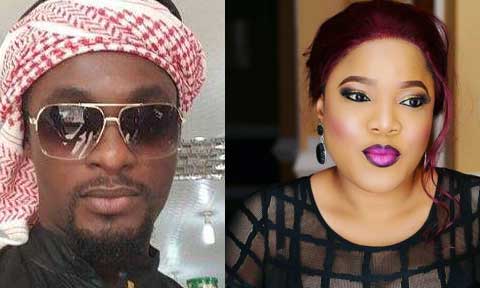 Recalled that last week, news making round the media disclosed that Toyin made claims about Adeniyi refusing to sign their divorce papers. An attempt she had made on several occasions to settle the feud in peace or sign the divorce papers which he refused. However, his refusal to sign the papers automatically meant they were still legally married, she claimed.

Following this information that went viral, Adeniyi responded to the allegations made by Toyin, denying ever putting his divorce with her on hold. He shared the information about the divorce and proceeds through his publicist to the media, claiming that, the only meeting that ever happened between them was a failed attempt to settle their marital differences which was held at Ikeja City Mall.

“It is quite appalling to read some unfounded reports online about me in respect of my marital issues with Toyin Abraham.

It is needless to re-emphasize that being together in the institution of marriage is a matter of choice and interest. In a situation where things do not work out anymore and the relationship has broken-down irretrievably, truth is the best virtue. Out of honour, i choose to put up this reaction/ disclaimer for the benefit of the interested public and the future that is unknown.

In relation to the execution of a divorce paper and all other processes connected thereto, I find it funny as to how low the concerned party would lay cheap claims to score points that I refused to sign papers. At no point in time did I ever refuse the execution of divorce papers. All that only occurred was an abortive mediation meeting held at Ikeja City Mall. Her former counsel and I agreed to meet for talks, as he wanted to facilitate reconciliation between I and Toyin at Ikeja City Mall; he never mentioned anything like divorce papers.

It was after the meeting that I called him several times to make proper arrangement for the divorce process, only for me to be told that toyin herself asked him (the lawyer) to still hold on. It is imperative to note that, for several months and till date, it is my counsel who has been chasing the other party. Her decision to create drama on the media is nothing but an “appeal to public sympathy”.

It is rather funny how some copy and paste bloggers post without verifying and to the social media commenters who read and comment without knowing the truth, is shoprite the court of law where papers are signed? Divorce paper of all documents? I therefore reiterate that i am willing to sign the divorce papers once a proper forum for its execution is communicated to my lawyer.

Further more I challenged the other party to post said letter on the internet with the date so all claims can be verified thank goodness your counsel can be contacted. God bless us all.”