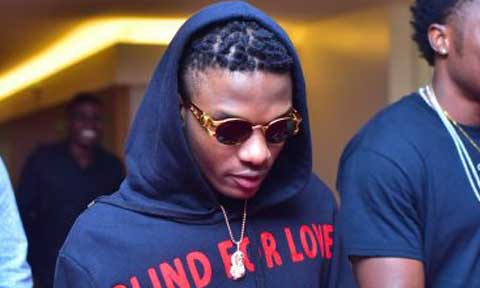 YOU are like the new kid in the block now. How does that make you feel?

(Laughs) I give God all the glory. It has not been easy, but I want to thank God that my work is being appreciated and has been bought by my fans within and outside of the country.

How did you manage to achieve so much within a short period of time?

My drive and focus for turning my life experiences into incredible music did it for me. It all started in 2010, when I released my first singles, Holla at your Boy, Gidi Girl and Ori Mi with label mate, Skales. Then there was my hit song, Tease Me which was just a studio freestyle that got leaked online and turned into a big hit in different parts of Nigeria. I will say it is the grace of God coupled with hard work.

Your videos make you a little bit bigger than you look. Do you do that on purpose?

(Laughs) That is true. I get to hear that every time. People say that I don't look this small in my videos but you are seeing me now, so you can tell how small I am.

Would you agree that the ladies in your videos look too mature for your age?

Like you said I look small seeing me face to face. What makes you think that the ladies are not small too? It is just a video. I am doing my work so I need something that will pass across the message in my songs. It does not mean anything. Most of my videos are shot at night and I find it difficult getting my friends to come out at that time to show their support because of their parents. That way, I have no option but to make use of the models available. It is not like I go out there to look for mature ladies.

Do you go as far as South Africa to get you models like most artistes do?

No! I am yet to shoot videos in South Africa. All the ladies you see in my videos are from Nigeria.

Let's talk about your performance at the finale of BBA Amplified. Were you surprised at the recognition you got, when you came on stage?

Yeah yeah, I was surprise. But I was also happy that I had that recognition there too. I was told that my song Holla at your Boy is very popular and is being played regularly on their national radio. For me, that is kind of big. I feel so blessed that I have been able to break across Nigeria. With this, who knows, I could get a Grammy.

Would that be your first time in South Africa?

Yes it is. I will be going back in a couple of weeks for another show, so my fans should watch out for me.

Were you serious when you said you will be quitting school because you cannot combine it with music?

I am sorry, it was a misconception. I did not say I will be quitting school, because I can never do such a thing. My parent would never allow that. What I did is to take a year break from school, for my tour. Once I am done with that, I will be going back to complete my studies.

How long is the tour expected to take?

It is just for a year. I will be taking a transfer to study Music Business outside Nigeria to gather experience and to know more about music too.

What would you say attracted Banky W to you?

Well, it was funny how we met. It was not like anybody introduced me to him. He knew about me and I about him, because he is Banky W. We went for a show one time and he invited us for an after party at his place. You know we were there for about an hour and he didn't know that I was Wizkid. When people were greeting me and he was like, are you Wizkid? And I was like yes, and he said he has been looking for me for months. We talked and he offered me a better deal which I went for.

Holla at your Boy made you popular. What were you doing before that?

The thing is I have always been doing music. Like every normal kid, I was in school doing my thing. By that, I mean I was recording songs and going to the studio to try and improve on my music. I also did some collaboration with the likes of Banky W, Jesse Jagz, Kel MI, and some other big names before Holla at your Boy.

If you had done collaboration with Banky W, how come he did not recognize you at his party?

He knew the name Wizkid, but he didn't know who I was. The collaboration was with MI and Banky was in it too.

You claim not to indulge in drugs, how then did the story of you carrying drugs come about?

That is not the first negative story about me and it definitely will not be the last. One thing I have learned about being a celebrity is that you get to get rumours about you everyday. And because you cannot go to people to explain to them what you are doing, it is only proper to give room for that.

Don't you think it can affect your career?

Well, it is just rumours like I said. Sometimes bad publicity is good publicity as well. That way, more people get to know you. I don't do drugs and my people know me and what I can do. Did you hear that I have been to Scotland before? I have never been there.

You never talk about your father in your interviews. Why is that?

Maybe it is just the few ones that you have seen. I love my dad, just the way I love my mom and he has always been there for me. He sent me to school. It is just that my father is a shy person just like me. But I am not shy when I am on stage because I love performing songs that I have recorded. I see it as my job.

Why the infusion of different genres in your music?

(Laughs) That is where the name Wizkid comes from. As Wizkid I try to experiment with my voice and sounds. That is the reason I try to take something from old school into new school and vice-versa. I just try to do something that I can dance to and my friends too. I really can't classify my music.

You are having a show in London on the 28th of this month, tell us about it?

Yes! It is a concert. And I will be performing alongside P-Square. It is kind of big and I am looking forward to it. And you know everybody is talking about Wizkid presently.

Is it going to be your first time in London?

No! It will be my second time there.

A 300L English Language student of Adekunle Ajasin University Ado Ekiti claims that you stole her song titled Pakurumo. How true is that?

(Laughs) What is the name of the school again? I saw the story on the internet. I have never been there and I don't even know the girl they are talking about. I have never been to Ado Ekiti before. It is funny, that is why I said earlier, that they keep coming. I go to sleep and wake up in rumours everyday. Nothing like that ever happened. I am sure that somebody just sits down and cooks up that too. It is funny; I don't even know what to say.

So how did you come about Pakurumo?

Pakurumo is a word that I have been hearing since I was young so I decided to make a song with the term.

So who is the lucky lady?

Right now I am very single, but liking someone at the moment.

If it is not music, what do you do at your leisure?

I like to sleep and watch the TV, but I do less of that now because of my busy schedule.

Is Wizkid still with his parents?

No! Wizkid lives with his label boss, Banky W and label mate, Skales for now, but visits his parents at least twice a week.

When did your musical career take off?

My singing career started at the early age of 11 when I recorded my first song with one of Nigeria's celebrated music icons, OJB Jezreel. I went on to record a 7-track album, which I released in my church in Lagos under the name of Lil' Prinz. This was just a stint that earned me a remarkable deal of encouragement and recognition from family, church and other artistes. In 2006, with a new stage name, and a passion for making music and developing my God-given talent, I got back into the studio to polish his craft. I continued to develop as a singer and songwriter by working under some of Nigeria's biggest names such as OJB Jezreel, Naeto C, Ikechukwu and many others. Over the years, my talent as a singer and songwriter became evident and it resulted in being prominently featured alongside some of the biggest artistes in Nigeria. The year 2009 I would say proved to be my break-out year, as my collaboration with M.I on Fast Money, Fast Cars became the talk of town. The song drew major attention to my distinct voice, and singing style. I also featured on Kel's Turn by Turn, Barcelos' radio jingle and many others.

So far, how many awards do you have to your credit?