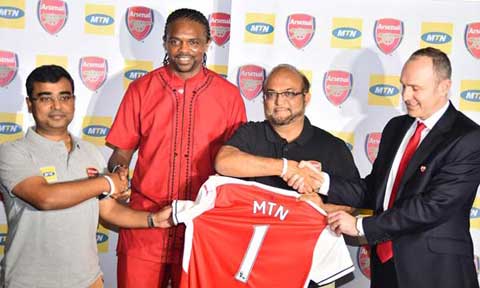 Before Saturday, February 4, promoters of the deal had hinted that MTN was bringing to Nigeria a partnership that would change the face of the country’s football. And so it was that with so much enthusiasm football enthusiasts trooped to the venue to be part of history. And they were not disappointed by the path to progress spelt out by the partners.

Among the heavyweights of Nigerian football and the telecommunications industry present to witness the event were former Arsenal striker, Nwankwo Kanu, his younger brother, Ogbonna, who played for Ajax Amsterdam, former Chelsea defender, Celestine Babayaro and Chairman, MTN Nigeria, Paschal Dozie, who promised that the relationship between his company and the English club has come to stay.

Tannock set the ball rolling by assuring all present that the deal is a win, win situation for coaches, subscribers and other Nigerians.Among the benefits expected to accrue to Nigeria are coaching clinics that could even bring legendary Arsenal boss, Arsene Wenger to run workshops in Nigeria, exclusive assess to Arsenal players for subscribers and trips to watch top EPL games, which Tannock affirmed were already in the pipeline.

Tannock reiterated Arsenal’s desire to partner with MTN and indeed Nigerian football for greater heights.Explaining the rational for the deal, MTN Nigeria Chairman, Paschal Dozie, said it was totally aimed at Nigerian football and it’s huge fan base with Arsenal.

“We shall ensure that this partnership benefits not only our subscribers but most importantly footballers as Arsenal has already set in place necessary mechanism to churn out talents from the Nigerian football system,” he said.

The deal, he added, will replace the likes of Nwankwo Kanu, Alex Iwobi, and Chuba Akpom in the Gunners. He said: “You can see what the little lad Kelechi Nwakali is already doing with Arsenal. That is part of the benefits that Nigerians will see soon with this partnership.”

To Iweanoge, the mere fact that top Arsenal officials were in the country to concretise the deal is a sign of the best things that are coming for Nigerian football.

He advised subscribers to visit the MTN site to avail themselves of the huge benefits the deal has for them both locally and internationally. Also speaking at the event, Nigeria and Arsenal legend, Nwankwo Kanu, said the deal by his former club and MTN has challenged him to work towards ensuring the London side built a reputable academy in the country.

Kanu, who also featured for such great clubs as Ajax Amsterdam and Inter Milan, said, “I have been thinking of what Arsenal can do for Nigeria and Nigerians… now I think MTN has given me a clue and it’s time to act and bring an academy from my former club here.  I am sure they will listen to me.”

He thanked MTN for the partnership with Arsenal and declared that all Nigerians were already beneficiaries of the deal going by the assurances he got from Arsenal officials present at the event.